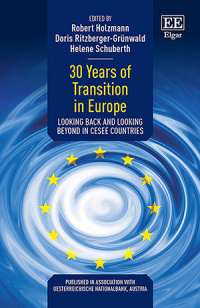 Looking Back and Looking Beyond in CESEE Countries

9781839109492 Edward Elgar Publishing
Edited by Robert Holzmann, Governor, Doris Ritzberger-Grünwald, Director and Helene Schuberth, Head of Division, Oesterreichische Nationalbank, Austria
Publication Date: 2020 ISBN: 978 1 83910 949 2 Extent: 256 pp
This thought-provoking book investigates the political and economic transformation that has taken place over the past three decades in Central, Eastern and Southeastern Europe (CESEE) since the fall of the Iron Curtain. Through an examination of both the successes and shortcomings of post communist reform and the challenges ahead for the region, it explores the topical issues of economic transition and integration, and highlights lessons to be learned.

More Information
Critical Acclaim
Contributors
Contents
More Information
This thought-provoking book investigates the political and economic transformation that has taken place over the past three decades in Central, Eastern and Southeastern Europe (CESEE) since the fall of the Iron Curtain. Through an examination of both the successes and shortcomings of post communist reform and the challenges ahead for the region, it explores the topical issues of economic transition and integration, highlighting important lessons to be learned.

Featuring contributions from both top academics and experienced policymakers, 30 Years of Transition in Europe first discusses the process of transition in CESEE from a historical perspective, analysing the impacts of differing approaches on economic and monetary policy, the role of central banks and the speed of reform in various countries of the region. Chapters also compare CESEE transformations to emerging economies in Asia, and examine contemporary concerns around financial and monetary stability, as well as exploring the long-term determinants of economic growth such as digitalization, climate change and demographic trends.

Economists, central bankers, and policymakers in the banking sector and other international financial organizations will find this book an enlightening read. It will also be useful for academics in economics and politics with a particular interest in emerging European economies and European integration.

PART I A historic transformation: heterogeneity in CESEE in a changing global context
1 Looking back on 30 years of transition – and looking 30 years ahead
Robert Holzmann
2 1989: the year of the great ambivalence
Anton Pelinka
3 The price of unity: the transformation of Germany and Eastern Europe after 1989
Philipp Ther

PART II A central banker’s view on monetary policy during transition
4 Monetary policy challenges during transition: the case of Serbia
Jorgovanka Tabaković and Ana Ivković
5 Monetary milestones of the past 30 years: the Czech National Bank’s view
Jiří Rusnok
6 Croatia – from hyperinflation to the road to the euro area
Boris Vujčić and Katja Gattin Turkalj

PART IV Lessons from three decades of catching-up in Asia
10 Catching-up in Central and Eastern Europe and East Asia – commonalities and differences
Michael A. Landesmann
11 Chinese multinationals in East Central Europe: structural, institutional or political considerations?
Ágnes Szunomár
PART V Challenges for CESEE’s near future: monetary and financial stability
12 Did macroprudential policies play a role in stabilizing the credit and capital flow cycle in CESEE?
Markus Eller, Helene Schuberth and Lukas Vashold
13 30 years of monetary and exchange rate regimes in Central and Eastern Europe: what has changed, and what is next?
Johannes Wiegand

PART VI The future of CESEE: the impact of megatrends
14 At the start of a new leadership of the European Commission and the European Central Bank: where is the place of Central and Eastern Europe?
Martin Selmayr
15 Will the EU overcome the East-West divide?
Ada Ámon
16 Demographic change in Central, Eastern and Southeastern Europe: trends, determinants and challenges
Tomáš Sobotka and Alexia Fürnkranz-Prskawetz
17 The demographic challenge of Eastern Europe and potential policy options
Mario Holzner