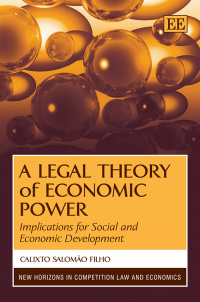 A Legal Theory of Economic Power

Implications for Social and Economic Development

More Information
Contents
More Information
In this provocative book Calixto Salomão Filho builds a strong case for why economic power cannot be considered a mere market phenomenon. Taking the forgotten realities and effects of these power structures into account, his comprehensive legal analysis persuasively argues the need for a new theory of economic power.

The book begins with a discussion of the insufficiency of antitrust concepts and instruments. The author provides an economic history of monopolistic colonial systems and its effect on the development process, and offers an alternate paradigm of legal structuralism and social organization. He goes on to explore the creation of economic power structures with a cogent discussion of market power, legal structures and the dominance of common pool resources. An examination of the dynamics and behavior of power structures follows, with particular attention paid to exclusion and collusion, legal monopolies and the exploitation of natural resources. The author shows clearly how the negative effects of economic power structures directly impact the social and economic development of societies.

This new legal theory, with its basis in the realities of economic structures, will prove a powerful alternative to the traditional market rationality paradigm. As such it will be of great interest to students and scholars of law and economics, development and antitrust.
Contents
Contents: Preface 1. A Neo-Structural Legal Perspective to Economic Power Analysis 2. Economic Power Structures: Creation and Existence 3. Power Structures: Dynamics and Behavior 4. Conclusion: From a General Theory of Economic Power to a General Theory of Law? Bibliography Index
Add to Wish List
eBook for individuals
978 0 85793 187 0
From $40.00
Click here for options
eBook for library purchase
978 0 85793 187 0
View sample chapter and check access on: