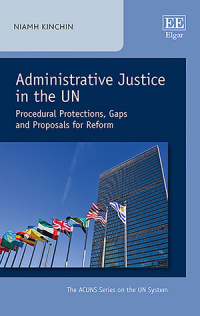 Administrative Justice in the UN

9781786432605 Edward Elgar Publishing
The ACUNS Series on the UN System
Niamh Kinchin, School of Law, University of Wollongong, Australia
Publication Date: 2018 ISBN: 978 1 78643 260 5 Extent: 240 pp
The UN’s capacity as an administrative decision-maker that affects the rights of individuals is a largely overlooked aspect of its role in international affairs. This book explores the potential for a model of administrative justice that might act as a benchmark to which global decision-makers could develop procedural standards. Applied to the UN’s internal justice, refugee status determination, NGO participation and the Security Council, the global administrative justice model is used to appraise the existing procedural protections within UN administrative decision-making.

Niamh Kinchin adeptly explores accountability in the context of decision-making within the UN and examines whether its administrative decisions, affecting the rights and obligations of individuals and groups, contain sufficient procedural protections. It is suggested that ’global administrative justice’ requires two fundamental elements; administrative decisions made according to law, and to values communities accept as just, which are identified as rationality, fairness, transparency and participation. This model is applied to the UN’s Investigations Divisions of the Office of Internal Oversight Services, the UN High Commissioner for Refugees, the UN Security Council and the Internal Formal Justice System in order to measure procedural protections, identify gaps and make recommendations for reform.

This insightful book will be vital reading for academics and students of human rights, constitutional, public international, and administrative law. UN-affiliated personnel, as well as those involved in diplomatic departments, will find this book an engaging read.
Critical Acclaim
‘Identifying common principles and appropriate institutions to achieve accountability in UN institutions is challenging. What ‘laws’ to apply and which bodies are affected is clearly explained and justified, and the suggested solutions are practical. Kinchin is to be congratulated for tackling the conceptually difficult task. The work should be compulsory reading for all the UN bodies making decisions affecting rights.’
– Robin Creyke AO, Emeritus Professor, Australian National University

‘Administrative Justice in the UN is a path-breaking study that extends the reach of ‘administrative justice’, a concept which has, hitherto, been used to throw light on domestic decision making and redress procedures. Based on the twin principles of law and justice, Niamh Kinchin develops the novel concept of ‘global administrative justice’ and applies it to decision making and disputes by the United Nations and its agencies. She displays an impressive command of her source material and writes with great clarity. Analysing international conventions and charters, and using the stock-in-trade techniques of the administrative lawyer, she has produced a fascinating book. It is a tour-de-force.’
– Michael Adler, University of Edinburgh, UK

‘Is the UN “accountable” for its administrative decision-making? This is the thought-provoking question posed by Niamh Kinchin in Administrative Justice in the UN: Procedural Protections, Gaps and Proposals for Reform – a lively, original and important contribution to our understanding of global administrative justice. Kinchin explores the UN’s commitments to fairness, transparency and justice across a range of decision-making contexts, from votes and vetoes in the Security Council, to investigating complaints about peacekeepers through the Internal Oversight Services, to adjudicating employment disputes before the UN Dispute and Appeals Tribunal. The book advances a global rule of law framework to enable the UN to address its “accountability deficit.” It will spark discussion and debate among experts and interested observers alike!’
– Lorne Sossin, Osgoode Hall Law School, York University, Canada
Contents
Contents: Introduction: ‘All is Forgiven’: Administrative Decision-Making Without Administrative Law 1. According to Law 2. According to Values the Community Accepts as Just 3. The Formal Internal Justice System of the UN 4. Office of Internal Oversight Services 5. UNHCR and Refugee Status Determination 6. The UN Security Council and Targeted Sanctions Concluding Remarks Bibliography Index