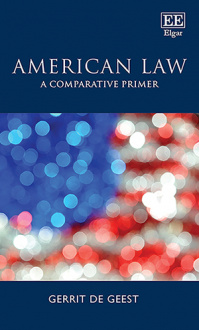 9781839101441 Edward Elgar Publishing
Gerrit De Geest, Charles F. Nagel Professor of International and Comparative Law, Washington University School of Law, US
Publication Date: 2020 ISBN: 978 1 83910 144 1 Extent: 136 pp
This concise primer offers an introduction to U.S. law from a comparative perspective, explaining not only the main features of American law and legal culture, but also how and why it differs from that of other countries. Students beginning LLM programs in the U.S., in particular international students, will find this primer invaluable reading.

More Information
Critical Acclaim
Contents
More Information
This concise primer offers an introduction to U.S. law from a comparative perspective, explaining not only the main features of American law and legal culture, but also how and why it differs from that of other countries. Gerrit De Geest initially focuses on the core characteristics of American law, such as the predominance of judge-made law, the significance of state law and the vital role that juries play in the legal process. De Geest then moves on to provide a succinct analysis of U.S. legal culture, before summarizing the principal differences in law and legal cultures around the world.

• A thorough introduction to the main elements of U.S. law for international students
• A concise, accessible style illustrated with lively anecdotes and discussion of relevant foundational cases
• Explanation of the historical and cultural roots of law in the U.S. and other countries to provide context for differences.

Students beginning LLM programs in the U.S., in particular international students, will find this primer invaluable reading. It will also be of interest to pre-law and comparative law students.

Critical Acclaim
‘This book would be a good starting place for those interested in the effect of major infrastructure projects on minority native populations.’
– Kate E. Britt, International Journal of Legal Information

‘American Law succeeds in succinctly describing the core attributes of U.S. law and jurisprudence in a straightforward manner. This book will be a useful introductory guide for a wide variety of audiences, particularly international law students and legal practitioners outside the U.S. Students and researchers in the U.S. who are new to comparative law may also benefit from reading American Law.’
– Anna Price, International Journal of Legal Information

‘I love the book. I think it is a winner. It has amazing breadth and focus, a really good selection of topics, and a great connection with recent literature. This is a fabulous book and a real “primer”: it primes the reader into thinking about American law. Students, scholars and practitioners trained in a foreign legal system will find this book an extremely useful resource. It gives both an inside and an outside perspective on American law and is a great read even for those who are already familiar with it. The author does so much more than introducing the American legal system and comparing it to foreign systems: he explains why American law is different and he does so in such an interesting way that it makes the book both a deep read and a very pleasant one.’
– Giuseppe Dari-Mattiacci, Columbia Law School, US