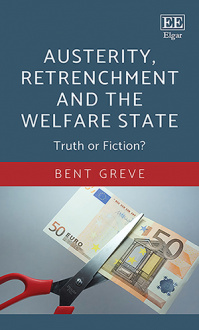 Austerity, Retrenchment and the Welfare State

9781789903706 Edward Elgar Publishing
Bent Greve, Professor in Social Science, Department of Social Sciences and Business, University of Roskilde, Denmark
Publication Date: 2020 ISBN: 978 1 78990 370 6 Extent: 176 pp
Are we living in an age of permanent austerity? In this insightful book, Bent Greve provides a comprehensive empirical analysis of welfare states since 2000, exploring the ways by which austerity can be measured and quantified. Through detailed comparative analysis between states, this book dissects the implementation of economic retrenchment, its extent and impact in Europe.

More Information
Critical Acclaim
Contents
More Information
Are we living in an age of permanent austerity? In this insightful book, Bent Greve provides a comprehensive empirical analysis of welfare states since 2000, exploring the ways in which austerity can be measured and quantified and how far retrenchment has impinged on European welfare states.

Detailed and nuanced, this book is critical for students of social policy, sociology and political science exploring contemporary European austerity programs. Researchers will also benefit, as the author casts new light on the development and trajectories of the modern welfare state.

Critical Acclaim
‘This book presents a comprehensive stock taking exercise of welfare state developments over the last two decades. It shows that, contrary to widespread perceptions and analyses that emphasize austerity and retrenchment, welfare spending has continued to increase. It provides further validation of the notion that welfare states are an indispensable component of modern political economies.’
– Giuliano Bonoli, University of Lausanne, Switzerland

‘The concept of austerity has been a dominant one in political and public policy discourse since the Great Recession of 2008. In social policy the “era of austerity” dates back even longer, to at least the turn of the millennium. Yet, the term is often ill-defined and its application is sometimes more assumed than measured and analysed. In this rigorously researched book Bent Greve develops a clear framework for investigating what “austerity” has actually meant for EU welfare states. When has it, and when has it not, been implemented? Greve paints on a broad comparative canvas, but draws a complex picture. This book provides a fresh, and needed, insight. It should be read by all with an interest in the recent history and possible futures of European welfare states.’
– Alex Waddan, University of Leicester, UK
Contents
Contents: Foreword 1. Austerity and the Welfare State: An Introduction 2. Key concepts 3. Can we measure change? 4. Tax or welfare? 5. Key developments in welfare state spending 6. Has there been austerity within the pension system? 7. Employment policy 8. Health care 9. Long-term care 10. Poverty and inequality 11. How far have welfare states changed? 12. Austerity in welfare states or not? Index