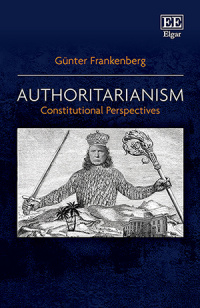 9781800372719 Edward Elgar Publishing
Günter Frankenberg, Goethe University, Frankfurt am Main, Germany
Publication Date: 2020 ISBN: 978 1 80037 271 9 Extent: 336 pp
In this thought-provoking book, Günter Frankenberg explores why authoritarian leaders create new constitutions, or revise old ones. Through a profound analysis of authoritarian constitutions as phenomena in their own right, Frankenberg reveals their purposes, the audiences they seek to address and investigates the ways in which they fit into the broader context of autocracies.

More Information
Critical Acclaim
Contents
More Information
In this thought-provoking book, Günter Frankenberg explores why authoritarian leaders create new constitutions, or revise old ones. Through a profound analysis of authoritarian constitutions as phenomena in their own right, Frankenberg reveals their purposes, the audiences they seek to address and investigates the ways in which they fit into the broader context of autocracies.

Frankenberg outlines the essential features of authoritarianism through a discussion of a variety of constitutional projects in authoritarian settings: the executive style of opportunist, informal governing, political power as private property, participation as complicity, and the cult of immediacy that is geared towards fantasies of a community of the followers and their leader. He also takes a comparative approach to authoritarian constitutions, drawing out the relationships between them, as well as providing a critique of the discourse around populism and authoritarianism.

Critical Acclaim
‘Authoritarianism remains an important contribution to the literature on both the political practices of authoritarianism and the purposes for which authoritarian actors deploy constitutions.’
– Stijn Smet, International Journal of Constitutional Law

‘The analysis is comprehensive and cuts deep into critical aspects of both authoritarianism and what is usually cast as its significant other: liberalism. The book contributes to the theoretical, historical, and comparative scholarship on constitutionalism, from a substantive point of view, while also putting diligently into practice the methodological commitments that ought to underlie constitutional research in the age of both the liberal democratic dream and the creeping, increasingly recurrent authoritarian nightmare. Frankenberg has managed to thoughtfully dissect authoritarianism and colour the conventional understanding of constitutionalism with perhaps less comforting and familiar but unquestionably more truthful and fascinating shades. The work is a much-needed testimony to the fact that both the naive faith in the virtues of constitutions and the cynical disregard for their failures are ill-fated scholarly attitudes, unfit for recognizing, studying, and correcting the shortcomings and crises of constitutional modernity.’
– Giusto Amedeo Boccheni, International Journal of Public Law and Policy

‘Why do authoritarian regimes bother with a constitution? This book pursues this seeming paradox with deep theoretical insight and broad empirical reach. The result is an indispensable guide to understanding the emerging varieties of authoritarianism and the magical allure that constitutions offer autocrats and democrats alike. This book also holds a mirror back to liberal constitutional regimes illuminating their colonial, ethnocentric, violent and parochial features to which they may have become “comfortably numb.”’
– Alvaro Santos, Georgetown University Law Center, US

‘“The good therapist fights darkness and seeks illumination, while romantic love is sustained by mystery and crumbles upon inspection.” If Irving Yolem is Love’s executioner, Günter Frankenberg is Authoritarianism’s executioner. Rather than romanticizing or despising authoritarian regimes, he deconstructs their authority, technology and power to reveal their deepest pathologies. In departing from the comparative constitutional orthodoxy, obsessed with constitutional backsliding to restore liberal legalism, Frankenberg exposes the existential pain and anxiety of liberals and warns them about their complicity in authoritarianism.’
– Fernanda G. Nicola, Washington College of Law, American University, US
Contents
Contents: Preface Introduction 1. Constitutions 2. Authority/Power 3. Authoritarian Moments of Liberal Constitutionalism 4. Political Technology of Authoritarianism 5. Authoritarian Power as Private Property 6. Participation as Complicity 7. The Cult of Immediacy 8. Audiences and Purposes of Authoritarian Constitutions 9. Notes on the Pandemic of Authoritarianism 10. Epilogue Bibliography Index