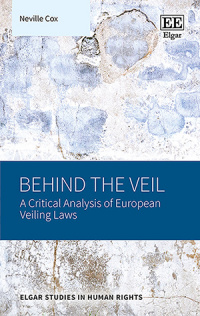 9781788970846 Edward Elgar Publishing
Elgar Studies in Human Rights
Neville Cox, Dean of Graduate Studies and Professor in Law, Trinity College Dublin, Ireland
Publication Date: 2019 ISBN: 978 1 78897 084 6 Extent: 288 pp
Since the early 2010s, an increasing number of European countries have passed laws that prohibit the wearing of various kinds of Islamic veil in particular circumstances. This insightful book considers the arguments used to justify such laws and analyses the legitimacy of these arguments both generally and in regards to whether such laws can be seen as justified interferences with the rights of women who wish to wear such garments.

More Information
Critical Acclaim
Contents
More Information
Since the early 2010s, an increasing number of European countries have passed laws that prohibit the wearing of various kinds of Islamic veil in particular circumstances. This insightful book considers the arguments used to justify such laws and analyses the legitimacy of these arguments both generally and in regards to whether such laws can be seen as justified interferences with the rights of women who wish to wear such garments.

This timely book considers the most recently passed European laws that target Islamic veiling. The author situates the justifications for anti-veiling laws in the context of a careful analysis of the reasons why women wear veils, and considers these justifications by reference to emerging debates surrounding the relative value of liberalism and human rights, multiculturalism, and the need to protect ‘traditional values’. The book concludes that these laws are best viewed as symbolic strikes at a recognisable symbol of an ideological opponent, theorising that their principal purpose is to enable particular countries to reaffirm traditional values in a context of increased domestic opposition to multiculturalism.

This engaging work will be valuable reading for students and scholars of human rights law, Islamic law and those interested specifically in the laws and regulations surrounding Islamic veiling around the world.

Critical Acclaim
‘Behind the Veil is a bold and ambitious volume. Cox adopts a pedagogic and pragmatic approach and always provides tools and explanations to the reader to follow his reasoning. Highly accessible and written in an easy, up-to-date style, Cox's book provides both an in-depth review of case law and policies and a sorely needed and thought-provoking examination of issues regarding the place of Islam in Europe and the devastating consequences that outlawing the veil might have in our societies.’
– Rim-Sarah Alouane, Journal of Law and Religion

‘Behind the Veil deepens the literature with its specific focus on the question of veiling and the way it is approached in European legislation and through the jurisprudence of the European Court of Human Rights (ECHR). Beyond the substance and the breadth of the argument, what makes this volume well worth reading is the incisive argumentative style of the author. Cox never briefly dismisses counter-claims but seeks to engage with them at length in a very transparent manner that clearly shows the steps in his reasoning, giving the reader a taste of Aristotelian rhetoric. As such, this volume is highly recommendable for those who are looking for an in-depth discussion of veiling laws in Europe.’
– Şerif Onur Bahçecik, Insight Turkey

‘This important and timely book by Neville Cox thus reminds us that ‘a legalistic language (can provide) an impoverished understanding of the competing motives, perspectives and sartorial styles by reducing the garment to its attributed symbolic meanings’. His thorough and systematic analysis of the alleged rationales of anti veiling laws reveals how law can serve the populist discourse
of ‘us’ versus ‘them’ and endanger democracy whilst ironically pretending to save it.’
– Myriam Hunter-Henin, European Convention on Human Rights Law Review

‘Though people may agree or disagree with his conclusions, anyone interested in the difficult and controversial topic of the restrictions on face-veiling in Europe will benefit from reading the interesting, well-researched and elegantly-argued book Neville Cox has written.’
– Ronan McCrea, University College London, UK
Contents
Contents: 1. Introduction 2. Rationales for Veiling and the Meaning of the Veil 3. Veiling and Rights 4. Terrorism, National Security and the Islamic Veil 5. Women’s Rights, Equality and the Islamic Veil 6. Veiling and Societal Values 7. Veiling and the Rights of Others 8. Symbolic Statements, Clashing Values and European Anti-Veiling Laws Index