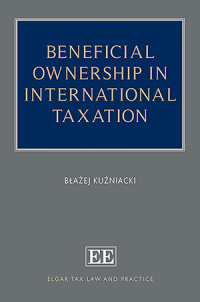 More Information
Critical Acclaim
Contents
More Information
This authoritative book provides a structural, global view of evolving judicial and doctrinal trends in the understanding of beneficial ownership in international taxation. Despite attempts by the OECD to clarify the concept, it remains ambiguous to tax authorities, courts and scholars alike, which has detrimental effects on the functioning of tax treaties. Błażej Kuźniacki presents a route towards an international autonomous meaning of beneficial ownership in international taxation, while also offering a comprehensive explanation of the divergent understandings and tax policy arguments underpinning its continuing ambiguity.

• Guidance towards solving definitional disputes between taxpayers and tax authorities
• Discussion of ground-breaking judgments in cases on beneficial ownership from various jurisdictions across the world
• Comprehensive reflection of tax law in action, particularly in respect of outbound investments that trigger transborder payments of dividends, interest and royalties
• Clear demarcation between appropriate and inappropriate usage of beneficial ownership by authorities and courts when addressing the issue of abuse of tax treaties and EU Directives

Beneficial Ownership in International Taxation will be a crucial resource for lawyers specialising in international taxation, tax practitioners and accountants, along with officials at tax authorities and judges hearing cases in this area. It will also be useful for policy makers working on cross-border taxation, and scholars and students researching international tax law.

Critical Acclaim
‘Beneficial ownership has been one of the most controversial terms in international tax law since it was first used in tax treaties. Dr. Kuźniacki explores in detail the origins of the controversy, the reasons for it and how it has unfolded through the years in international organizations (i.e. OECD, UN) and in different judicial decisions. The outcome is a great book on beneficial ownership, with a detailed, enlightening and thought provoking discussion that is no doubt a reference for those interested in the evolution of this concept.’
– Adolfo Martín Jiménez, University of Cádiz Law School, Spain

‘There has been a need for some time for a book that provided a thorough analysis of the historical origins, changes in interpretation, and application in practice of the “beneficial ownership” concept. Professor Błażej Kuźniacki has now completely satisfied that need with a comprehensive and illuminating discussion of the BO concept. This book traces the lack of clarity over the concept from its first appearance in tax treaties through to the latest case law and its inter-relationship to post-BEPS anti-avoidance measures. Aside from its full analysis, the book adds an appendix analysing several of the leading cases on the topic. How amazing, though, that just two words in tax treaties can spawn an academic work of over 400 pages! This book should sit on the bookshelf alongside Arvid Skaar’s magnum opus on “permanent establishment”, where two words generated a work of over 900 pages.’
– Philip Baker QC, Gray’s Inn and Oxford University, UK

‘In his book on Beneficial Ownership in International Taxation Dr. Kuźniacki provides for a comprehensive, profound and thought-provoking analysis of beneficial ownership as the theme has developed in the past 80 years. His work is thorough and detailed and a must-read for practitioners and academics working in international taxation.’
– Stef van Weeghel, University of Amsterdam, the Netherlands