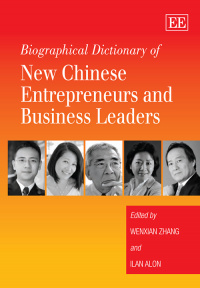 More Information
Critical Acclaim
Contents
More Information
This exhaustive resource provides comprehensive coverage of the major players in the Chinese economy since the reform era, which began in 1978. It includes 200 entries briefly summarizing each individual’s life and career, with a central focus on his or her accomplishments and the key roles played in the economic development of China. The emphasis of the book is on the movers and shakers of China’s new economy, highlighting notable figures from both the initial economic liberalization period and the renewed growth from the early 1990s to the present time.

This invaluable dictionary is the result of collaborative efforts across the globe. Over forty scholars from the United States, mainland China and Taiwan, United Kingdom, Germany, France, Norway, Israel and Malaysia contributed. They cover the full spectrum of Chinese industries from banking, finance and investment, real estate, transportation and infrastructure, to manufacturing, telecommunications, media, agriculture, automobile, pharmaceutical, food, trade, service and retail industries.

The book includes not only business leaders from mainland China, but also entrepreneurs from Hong Kong, Taiwan and Southeast Asia who have strong ties with the Chinese economy. Because of the key roles they played in economic development, some leading economists and high-ranking government officials are also included. The editors do not shy away from controversial figures, whose actions have had profound impacts on the Chinese economy, and who may have gotten into legal problems later in their career.

Scholars, practitioners and librarians in international business, entrepreneurship and Asian studies will find this volume an essential addition to their reference shelf.
Critical Acclaim
‘The Biographical Dictionary of New Chinese Entrepreneurs and Business Leaders is a starting point for research and an important addition to academic libraries supporting a program in business.’
– Lucy Heckman, American Reference Books Annual

‘This new biographical dictionary can be considered the first Asian business biographical book of its kind to systematically profile Chinese entrepreneurs and business leaders based on independent research, and thus, may serve to be a recognized and respected works of reference for practitioners who may be interested in learning and understanding the acquaintance of building guanxi with the right people while doing business in China. In addition, this Dictionary is a useful reference source of information for academics, researchers and librarians specializing in the fields of international Asian business studies, entrepreneurship, Chinese economic system.’
– William Choy, Chinese Management Studies

‘The book is an outstanding compilation. It is easy to use, the information is clear and well-presented, and the volume is smart and robustly crafted. . . The book is an important reference source for practitioners in international business, entrepreneurs and Asian studies.’
– Bob Duckett, Reference Reviews

‘The current compilation fills the need for a Who’s Who in the Chinese business world. . . This is a useful reference for scholars and students in China studies and for business practitioners. Recommended.’
– K.T. Wei, Choice

‘As direct foreign investment, both inward and outward, continues to gather momentum, the need to understand the leaders of Chinese corporations is increasingly important. The Biographical Dictionary of New Chinese Entrepreneurs and Business Leaders is therefore a welcome addition to corporate and academic libraries. The encyclopedia provides up-to-date coverage of the major players in China’s new economy.’
– Dorothy Mays, Chinese Librarianship

‘A long awaited reference volume! Professionally compiled and user-friendly. A must for the serious researcher.’
– Leo-Paul Dana, Journal of Enterprising Communities

‘Biographical information about business leaders and entrepreneurs in China is scattered in a variety of Chinese sources such as books, newspapers, journal articles, web pages, etc. and are difficult to locate, especially from outside of China. This biographical dictionary, written in English, which includes some 200 of the most important movers and shakers of the new Chinese economy since 1978, is a very useful reference tool for libraries of all types as well as for anyone who is interested in learning and understanding the growing influence of China as a new economic power in the world.’
– Hwa-Wei Lee, formerly of the Library of Congress, and Ohio University Libraries

‘This impressive effort by two leading scholars of Chinese business and society will quickly become a reference for all students and practitioners. Indeed, it is a ready vade mecum, filling the crying gap many experts have identified in recent years. This work will set the standard for its successors: independent in its analytical assessments, broad-spectrum in its choice of entry, far-sighted in its selections.’
– John R. McIntyre, Georgia Institute of Technology, US

‘The book is a must-have for any student, library, executive or entrepreneur contemplating the business environment in China. In an important society where clout is paramount and relationship is key, the book’s listing of Who’s Who in China is essential to success. An essential read for anyone thinking of doing business in China!’
– J. Mark Munoz, Munoz and Associates International and author of A Salesman in Asia

‘For anyone interested in interacting with China, whether doing business or not, it would be advantageous to “know thy foe and thyself”, as Sunzi (Sun Tzu) put it. And this work will definitely be conducive to your gaining an insight on contemporary China and its economic boom. It can be used as a reference tool or read as a textbook. Highly recommended for college and public libraries.’
– Shixing Wen, Editor-in-Chief, Chinese Librarianship, Former President, Chinese American Librarians Association and Councilor, American Library Association
Contents
Contributors to the volume and their entries