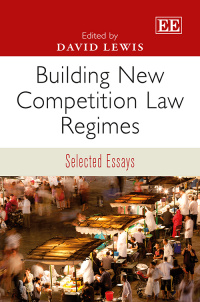 Five of the chapters examine the development of competition law regimes in a diverse range of countries: Mexico, Hungary, South Africa, Thailand (with comparative remarks on South Korea) and Zambia. The remaining chapters examine the role of multinational institutions, particularly the International Competition Network, and the practice of and potential for regional competition law arrangements. The majority of the authors are seasoned practitioners of competition law, all of whom acknowledge the importance of convergence, while simultaneously demonstrating the limits imposed by divergent national circumstances. This carefully edited collection is a companion volume to Enforcing Competition Rules in South Africa, an account of the development of competition law institutions in South Africa, authored by David Lewis and published by Edward Elgar.

Building New Competition Law Regimes will be of particular benefit to scholars, teachers and practitioners of competition law. It will also be of interest to development studies scholars, teachers and practitioners and to specialists in the countries that are the subjects of the case studies.
Critical Acclaim
‘There is much in this book that is very interesting and the essays have been extremely well-collated and organised - it is clear that much thought has been given by David Lewis to the issues that matter. There remains much more to be said about the development of competition law, the role that more developed and better supported systems have to play in facilitating this and the role of multinational organisations. The fact that I can think of essays that I wish had been written and included here in no way detracts from the value of this volume; rather the opposite is suggested - that fascinating and important questions have been raised. To policy-makers and academics, as well as to those interested in competition law generally, this book can be highly recommended.’
– Mark Furse, European Competition Law Review

‘Nearly every important country now has a competition law. It is vital to understand the institutions that drive the operation of these laws. This excellent volume provides case studies of some of the more substantial new competition authorities written by former or current top agency officials and academics closely connected with those institutions. The book highlights the fact that whilst these institutions have certain features in common, they are very much shaped by the history and circumstances of their own countries and cultures, and that any serious prescription for them needs to balance those factors against the general economic doctrines that lie behind competition law around the world. Without that understanding, regulators and those dealing with them are likely to face failure. The book points to ways of resolving those problems.’
– Allan Fels, University of Melbourne, Australia

‘This thoughtfully curated collection has much to offer, providing nuanced insights into an increasingly global phenomenon that has, as these essays demonstrate, inescapably local components nonetheless.’
– Niamll Dunne, The Cambridge Law Journal

2. The Evolution of the Hungarian Competition Regime: 2 Decades of Dynamic Change and Continuity
Csaba Kovács and Andreas P. Reindl

3. Pigeon-holed by Precedent: Form versus Substance in the Application of South African Competition Law
Janice Bleazard

4. The Political Economy of the Competition Regimes in Thailand and South Korea: A Comparison
Deunden Nikomborirak

5. The Role of SMMEs in the Formal and Informal Economy in Zambia: The Challenges Involved in Promoting them and Including them in Competition Regulation
Thula Kaira

PART II: MULTINATIONAL ISSUES AND INITIATIVES
6. The Past and Future of International Antitrust: Gaps, Overlaps and the Institutional Challenge
Eleanor Fox, John Fingleton and Sophie Mitchell