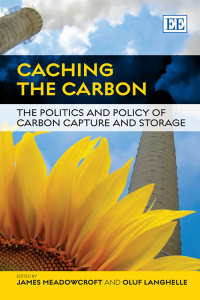 The Politics and Policy of Carbon Capture and Storage

9781848444126 Edward Elgar Publishing
Edited by James Meadowcroft, Carleton University, Ottawa, Canada and Oluf Langhelle, University of Stavanger, Norway
Publication Date: 2010 ISBN: 978 1 84844 412 6 Extent: 320 pp
Over the past decade carbon capture and storage (CCS) has increasingly come to the fore as a possible option to manage carbon dioxide emissions that are currently contributing to human induced climate change. This book is concerned with the politics of CCS. The authors examine the way CCS has been brought into the political realm, the different interpretations of the significance of this emerging technology, and the policy challenges government and international institutions face with respect to its development, deployment and regulation. The book includes case studies of engagement with CCS in a number of developed countries as well as more thematically focused analysis.

More Information
Critical Acclaim
Contributors
Contents
More Information
Over the past decade, carbon capture and storage (CCS) has come to the fore as a way to manage carbon dioxide emissions contributing to climate change. This book examines its introduction into the political scene, different interpretations of its significance as an emerging technology and the policy challenges facing government and international institutions with respect to its development, deployment and regulation.

The focus of the book is on the construction of arguments about CCS in the public sphere, the coalitions of actors who have articulated distinctive perspectives on CCS and the varied strategies governments have adopted to integrate it into climate and energy policies. The authors analyse the issues decision-makers now confront in encouraging the uptake of the technology, managing uncertainties and regulating attendant risks. The book includes case studies of the reception of CCS in seven OECD countries: Australia, Canada, Germany, the Netherlands, Norway, the United Kingdom and the United States. Developments in the EU form the subject of an eighth case study. The authors point to the political significance of CCS as a mitigation option offering a way forward for fossil fuels in a carbon constrained world, while also emphasizing the uncertainties that surround its future development and deployment.

Students, scholars and researchers from a wide variety of fields who are interested in climate change, energy policy, and the politics and policy of the environment will find this book illuminating, as will officials and policy makers in international organizations and governments.
Critical Acclaim
‘. . . the volume is a timely and informative text for students and academics, as well as for practitioners within international organizations and governments.’
– Rudra Kapila, Climate Law
Contributors
Contributors: D.H. Claes, P. Frisvold, N. Gunningham, M. Jaccard, O. Langhelle, J. Meadowcroft, B. Praetorius, I. Scrase, J. Sharp, D. Sinclair, J.C. Stephens, A. Tjernshaugen, P.J. Vergragt, C. von Stechow, J. Watson
Contents
Contents:

1. The Politics and Policy of Carbon Capture and Storage
James Meadowcroft and Oluf Langhelle

7. CCS in the UK: Squaring Coal Use with Climate Change?
Ivan Scrase and Jim Watson

8. CCS in the Netherlands: Glass Half Empty or Half Full?
Philip J. Vergragt

11. The Politics and Policy of CCS: The Uncertain Road Ahead
James Meadowcroft and Oluf Langhelle