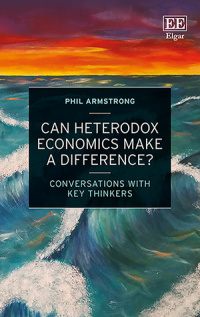 9781800370883 Edward Elgar Publishing
Phil Armstrong, University of Southampton Solent and Engineering Division, York College, UK
Publication Date: 2020 ISBN: 978 1 80037 088 3 Extent: 528 pp
In a series of in-depth interviews with leading economists and policy-makers from different schools including Austrian, Monetarist, New-Keynesian, Post-Keynesian, Modern Monetary Theory, Marxist and Institutionalist, this intriguing book sheds light upon the behaviour of economists and the sociology of the economics profession by enabling economists to express their views on a wide range of issues.

More Information
Critical Acclaim
Contents
More Information
In a series of in-depth interviews with leading economists and policy-makers from different schools including Austrian, Monetarist, New-Keynesian, Post-Keynesian, Modern Monetary Theory, Marxist and Institutionalist, this intriguing book sheds light upon the behaviour of economists and the sociology of the economics profession by enabling economists to express their views on a wide range of issues.

Exploring why the aftermath of the 2008 global financial crisis did not pave the way for an uptake in heterodox economic approaches, these key thinkers consider why mainstream economics still reigns supreme and explore whether an alternative approach can be developed to rival it. The most important issues facing the discipline are addressed, and the book offers a particular focus upon the extent to which radical economists can work together to provide a genuine alternative to orthodoxy.

The analytical responses to important questions posed to each interviewee make this a critical read for practising economists both inside and outside of academia. It will also be a thought-provoking book for economics students focusing both on orthodox and heterodox viewpoints, as it offers important insights to the nuances between a vast range of different schools of thought.

Critical Acclaim
‘If one is a student of this discipline, the range of views presented in full is invaluable. I cannot recommend this text more.’
– Hannes Ingo Torbohm, The Gower Initiative for Modern Money Studies

‘Can Heterodox Economics Make a Difference? is a very thought provoking book; a fascinating tour with key thinkers on MMT, heterodox economics, methodology and much more. There are authentic gems in those interviews. Please read on!’
– Giuseppe Fontana, University of Leeds, UK and Università del Sannio, Italy

‘Philip Armstrong's rich conversations with heterodox economists explore, perhaps for the first time in depth, the perceptions and misperceptions of Modern Monetary Theory as seen across the spectrum of Keynesian, Marxian, Structuralist and Austrian thought, alongside the insights and arguments of leading proponents of the MMT school. For reading and reference, a valuable and timely book.’
– James K. Galbraith, The University of Texas at Austin, US

‘The reader can “listen in” to all these conversations where questions are addressed, and debate engaged, from different perspectives. By engaging vicariously in the exchanges we are encouraged to rethink our own positions, and consider how to strengthen or amend them. Much of the success of the interviews is down to the engaging interview style of Phil Armstrong, whose thoughtful questions, openness to different arguments (at different levels), and eagerness to engage in civil debate, are the hallmarks of pluralism. Enjoy.’
– from the Foreword by Sheila Dow, University of Stirling, UK