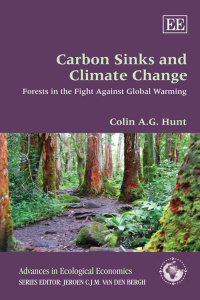 9781847209771 Edward Elgar Publishing
Advances in Ecological Economics series
Colin A.G. Hunt, School of Economics, The University of Queensland, Australia
Publication Date: 2009 ISBN: 978 1 84720 977 1 Extent: 256 pp
Reforestation and avoiding deforestation are ways of harnessing nature to tackle global warming – the greatest challenge facing humankind. In this book, Colin Hunt deals comprehensively with the present and future role of forests in climate change policy and practice. A review of the workings of carbon markets, both based on the Kyoto Protocol and voluntary participation, provides a base from which to explore forestry’s role. Emphasis is on acknowledging how forests’ idiosyncrasies affect the design of markets for sequestered carbon. Chapters range from the role of forests in providing biofuels and biodiversity, to measuring and valuing their stored carbon.

This timely and comprehensive book will be of great value to any reader interested in climate change. Policy-makers within international agencies and governments, academics and students in the fields of geography, economics, science policy, forestry, development studies as well as carbon market participants and forest developers in the private sector will find it especially useful.
Critical Acclaim
‘The importance of this book lies in being one of the first comprehensive attempts to summarise major findings in the field of carbon sinks and climate change. . . The book also deals comprehensively with the present and future role of forests in climate change policy and practice. . . This timely book is essential reading for policy decision-makers and foresters alike.’
– Wasantha Athukorala, Economic Analysis and Policy
Contents
Contents: Foreword Preface Introduction 1. The Making of Markets for Carbon and the Potential of Forestry Offsets 2. Forestry in the Kyoto Protocol 3. Forestry in Voluntary Carbon Markets 4. Biodiversity Benefits of Reforestation and Avoiding Deforestation 5. Measuring the Carbon in Forest Sinks 6. Forests as a Source of Biofuels 7. Forestry in the Climate Change Policies of Selected Developed Countries 8. Policies for Reducing Emissions from Deforestation and Forest Degradation (REDD) Index
Add to Wish List
eBook for individuals
978 1 84980 210 9
From $40.80
Click here for options
eBook for library purchase
978 1 84980 210 9
View sample chapter and check access on: