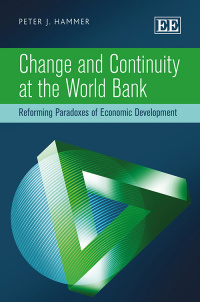 Change and Continuity at the World Bank

More Information
Contents
More Information
This fascinating book examines the World Bank’s capacity for change, illustrating the influence of overlapping political, organizational and epistemic constraints. Through comprehensive historical and economic analysis, Peter J. Hammer illuminates the difficulties faced by recent attempts at reform and demonstrates the ways in which the training and socialization of Bank economists work to define the policy space available for meaningful change.

The author examines the patterns of change and continuity at the World Bank during the presidencies of James Wolfensohn (1995–2005), Paul Wolfowitz (2005–2007) and Robert Zoellick (2007–2012) and discusses the role that various Chief Economists have played in the evolution of the Bank’s research activities. His analysis of Bank reforms – both successful and unsuccessful – demonstrates how neoclassical economics sets the Bank’s research and development agendas and limits reform possibilities derived from different academic traditions.

This clear and balanced account is an important case study in the role that epistemic constraints can play in the formation of public policy, with implications for both the World Bank and other international organizations. Students, professors and researchers with an interest in economic development, institutional economics and policy studies will find it an invaluable resource, as will government officials and practitioners working in international development.
Contents
Contents: Preface – An Economic Pilgrimage 1. The World Bank and Wolfensohn Era Reforms 2. The ABCs of the World Bank 3. A Framework for Modeling Bank Behavior 4. The Dynamics of Epistemic Economic Change 5. Application to Debt Relief, Participation and Knowledge 6. Application to Social Capital 7. Application to Institutional Economics 8. Redefining Bank Research within the Epistemic Constraints of Economics 9. Bank Evolution since Wolfensohn 10. The Future of Development Index
Add to Wish List
eBook for individuals
978 1 78100 927 7
From $40.00
Click here for options
eBook for library purchase
978 1 78100 927 7
View sample chapter and check access on: