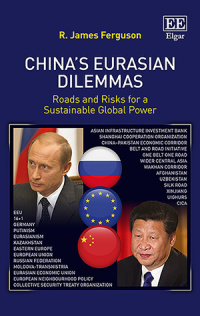 Roads and Risks for a Sustainable Global Power

Including an up-to-date analysis of wider Central Asian and transnational interactions between China and the EU, Eastern Europe and Russia, Ferguson critically evaluates the present and prospective implications of Chinese initiatives in the region. Particular emphasis is paid to China’s decision to create the Belt and Road Initiative and establish the Shanghai Cooperation Organization. Divergent perspectives on multilateral international systems across Eurasia are also discussed, focusing on the contrast between Chinese and Russian approaches. Ferguson also explores the complexity of China-Russia relations with the ongoing formation of Vladimir Putins and Xi Jinping’s legacies, linking their Eurasian and global agendas.

Academics researching Eurasian politics and international relations – specifically Sino-Russian relations – will find this book an excellent addition to the literature, advancing their understanding of China’s role in global politics.

Critical Acclaim
‘... a timely book that observes China’s grand transition strategy and its impact on Eurasia. Amid the many books and articles concerning both the Belt and Road Initiative (BRI) and China’s global strategies under Xi Jinping’s leadership, the most distinctive insight in Ferguson’s monograph is his description of the seminal but silent shift of Beijing’s diplomatic orientation from the Pacific Ocean to Asia’s inner regions. From a thematic perspective, the book comprehensively covers issues concerning security, human rights,
energy, the environment, trade, investment, and regional institutions. In conclusion, given its comprehensive content and innovative perspective of understanding China’s global ambition through its strategic “Eurasian Turn”, this book will be a helpful reference for students and scholars studying international relations, especially with regard to China and Eurasia. It can also be recommended to readers who are interested in China’s changing geopolitical strategies and its relations with partners both near and far on the Eurasian continent.’
– Xiaoguang Wang, Europe-Asia Studies

‘This book is a goldmine for understanding the historical context, geopolitical dynamics and economic motivation for the rise of China and its reclaiming of footprints in Eurasia including China's Belt and Road initiative, ambitious foreign economic development and infrastructure projects in the 21st Century. James Ferguson provides a comprehensive and thoughtful look at the rise of China's role in Eurasia and beyond. This is a must read for any scholar who studies the historical, political and economic links among China and Eurasian countries and the rest of the world.’
– Xiaohua Yang, University of San Francisco, US

‘China’s engagement with Eurasia remains overshadowed by the US-China dimensions of the emerging 21st century global order. Ironically, China’s management of Eurasian affairs is the central proving ground, and opportunity, for realization of an alternate model of relations that could harmoniously accommodate the globe’s great states. Ferguson’s detailed and insightful analysis of China’s Eurasian dilemmas establishes critically needed space for considering the global implications of this neglected region.’
– Brett McCormick, University of New Haven, US

‘A bravura performance. R. James Ferguson compellingly guides the reader to a nuanced understanding of the background of China’s engagement with Eurasia, focusing on major issues that are emerging in the 21st Century, all the while filling an important gap in the literature on the Eurasian aspects of China’s evolution into a global power. This thoughtful book will provide generalists and specialists alike a better understanding of the multidimensionality of issues related to global security.’
– Joseph M. Siracusa, RMIT University, Australia
Contents
Contents: Preface - China, Eurasia and Global Order 1. China’s Eurasian Footprint 2. Dangerous Frontiers: Beyond the CSTO and SCO 3. Great Power Miscalculations in Wider Central Asia 4. China and Russia: Divergent Visions of Multipolarity 5. The Putin Timeframe: The Limits of Geopolitics 6. Linking the Silk Roads: The Belt and Road Initiative as the Driver of Eurasian Integration 7. China and the EU: The Hidden Balancer 8. The Eurasian End-Game: From Regional Roles to Sustainable Global Power 9. Conclusion: Dystopic China or Balanced Order-Building? Bibliography Index