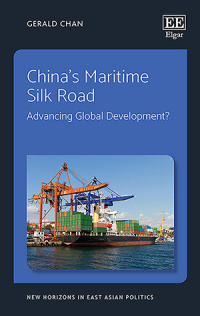 Gerald Chan explores China’s rising maritime power, using geo-developmentalism as a theoretical framework to analyse the country’s development of port facilities and infrastructure along important trade routes. Through developing these sea routes, he argues that a new global order is in the making. The book also offers an in-depth and balanced review of two major criticisms of China’s BRI: the first being so-called ‘debt trap diplomacy’, and the second being security concerns surrounding China’s IT industry, the resolution of which Chan suggests will pave the way towards developing a ‘digital Silk Road’.

Following on from Chan's previous work on high-speed rail and other land networks, this book offers a comprehensive and up-to-date account on infrastructure building in this context. It will prove a stimulating read for scholars and students of Chinese foreign policy and international relations, as well as policy makers, government officials and businesses seeking to better understand China’s foreign trade and development policies.

‘This new book by Professor Gerald Chan provides some fascinating perspectives in response to the current tense debate on China's role in global development. It also challenges many pessimistic views on the fate of globalization. This book should be interesting to anyone who is keen to develop a deeper understanding of the impact of China's rise on our future global order.’
– Mingjiang Li, Nanyang Technological University, Singapore

‘Expanding on the concept of geo-developmentalism from his previous volume – Understanding China’s New Diplomacy – Professor Gerald Chan casts a keen eye over the complex linkages of multiple arenas and issue areas, as well as the actions and reactions of state and non-state actors in the expanding Chinese Maritime Silk Road. Accessible, timely, and comprehensive, China's Maritime Silk Road provides a compelling primer for anyone seeking an overall strategic guide to China's recent impact on the global order.’
– Kun-Chin Lin, University of Cambridge, UK

‘Professor Gerald Chan provides a penetrating and comprehensive analysis of China’s Maritime Silk Road through an analytical framework of geo-developmentalism. This is a must-read for anyone interested in understanding China’s Belt and Road Initiative, China's maritime strategy, and China’s interaction with global order more broadly.’
– Xiaoyu Pu, University of Nevada, US
Contents
Contents: Preface 1 Introduction 2 Whither the maritime Silk Road? 3 Geo-developmentalism: a new framework for analysis 4 Journey to the west: Europe and Africa through the Indian Ocean 5 Path to the south: Oceania and the South Pacific through Southeast Asia 6 Venture to the north: Europe and North America through the ‘Polar Silk Road 7 How does China protect its maritime Silk Road? 8 Conclusion Bibliography Index