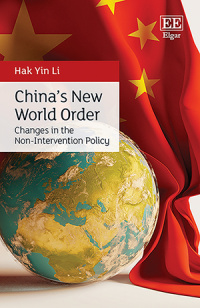 Providing a new perspective on the study of China through its discrepant foreign policies, Hak Yin Li delivers a comprehensive overview of the principles of Chinese foreign policy, critically examining the evolution of the Chinese non-intervention policy. Rich with empirical discussions on key cases, the book also includes interviews with Chinese scholars and provides a wide breadth of information from official sources such as China’s Ministry of Foreign Affairs.

This invigorating read will be an excellent resource for international relations scholars, policy analysts and researchers who are interested in the evolution of Chinese non-intervention policy, and China’s emerging soft-interventions in North Korea, Myanmar and the two Sudans. Readers with an interest in Chinese foreign policy and China’s normative role in shaping the world order will also find this an enlightening read.

Critical Acclaim
‘Hak Yin Li’s pathbreaking analysis of China’s “non-interventionist policy” tests his concept of “soft intervention” against case studies of North Korea, Myanmar, and North and South Sudan. While most Westerners portray a rising China as a self-interested, revisionist power, which cynically rejects its principles, Li argues that China’s articulated norm of “non-interference” makes it a “self-restrained rising power”, whose actions diverge from US hegemonic activity, thereby suggesting that China’s rise may be less threatening to the international order.’
– David Zweig, Professor Emeritus, The Hong Kong University of Science and Technology, China

‘Many Americans have regarded China's rise as posing a threat to the US. However, how many of them have paid attention to the fact that the United States has been fighting wars in so many places of the world while China has focused on gaining greater wealth, power and influence? How to explain the difference of foreign policy behavior between the two countries? In this book Hak Yin Li has answered these questions, by explaining the origins and evolution of China’s non-intervention foreign policy. While many have been critical about China’s non-intervention policy in areas such as trade and investment, it is exactly this policy that has helped China. Everyone who is interested in understanding China’s rise must read this book.’
– Yongnian Zheng, The Chinese University of Hong Kong, Shenzhen, China
Contents
Contents: Preface and acknowledgements 1. Introduction to the rise of China 2. China: between a revolutionary and a revisionist power 3. Two policy faces and the case of China 4. Evolution of the Chinese non-intervention policy 5. North Korea: getting Kim’s family back on track 6. Myanmar: stabilizing the Indo-China peninsula 7. Sudan: pulling the two Sudans out of the fire 8. Is China a self-restrained rising power? Bibliography Index
Add to Wish List
eBook for individuals
978 1 78643 733 4
From $40.00
Click here for options
eBook for library purchase
978 1 78643 733 4
View sample chapter and check access on:

Human Security and the Politics of Corporate Social Responsibility in China