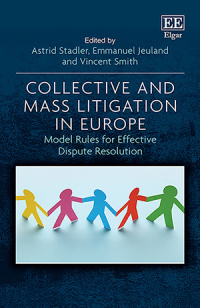 Collective and Mass Litigation in Europe

More Information
Critical Acclaim
Contributors
Contents
More Information
Written by leading authorities in the field of European civil procedure and collective redress, this timely book explores the model collective proceedings rules in the ELI/UNDROIT European Rules of Civil Procedure. It explains the intended application of this ‘best practice’ set of collective redress rules, intended to promote greater consistency in civil and commercial court procedure across Europe, linking to existing European practice and initiatives in the field.

Chapters investigate important issues for mass and collective actions including certification of actions as suitable for collective treatment, collective settlement, costs and funding. Concluding with insights from class action experts outside Europe, this incisive book provides objective perspectives on this rapidly developing area of European legal practice and proposes areas where these rules may influence class actions internationally.

Collective and Mass Litigation in Europe will be a key resource for scholars and students of collective redress and civil procedure. The commentary on this significant benchmark in collective redress litigation will also be of benefit to policy makers, judges and legal practitioners involved in mass claims.

Critical Acclaim
‘With the recent adoption of the EU Directive on collective redress, a study on the respective rules in the European Rules of Civil Procedure proposed by UNDROIT and ELI is most welcome. These rules are intended to serve as a model for national legislatures, precisely what is needed now in order to implement the new directive. The editors assembled a team of leading academics and practitioners from around the globe. The book is well-organized and not only provides a succinct commentary on the ERCP rules on collective redress, but goes beyond that by contributing to a truly in-depth understanding of the subject of collective redress in general.’
– Georg Kodek, Vienna University of Economics and Business, Austria

'The concept of developing model rules for a European Civil Procedure Code has, as its zenith, the topic of collective redress, given the longstanding variances of legal attitude, culture, substantive law, and procedural rules across the EU member states on this intricate topic. This ambitious work, via its various contributors, makes an important and thoughtful contribution to the collective redress journey, by drawing out the differences, and commonalities, that inform the essential ability of any legal system to enable access to justice for those who could not otherwise afford it.'
– Professor Rachael Mulheron, Queen Mary University of London, UK

‘A specifically European model of collective redress is taking shape. Its progressive construction owes much to lessons learned from across the Atlantic, so that its design can be seen in many ways as a response to what was long seen as American exceptionalism. As Europe opens up to aggregate litigation and the emergence of “the statistical victim” (famously so-termed by Sheila Jasanoff), the analyses provided in this book will serve usefully to navigate the complex procedural issues that accompany the transplant.'
– Horatia Muir Watt, Sciences Po Law School, France
Contributors
Contributors: P. Cashman, F. Gascón Inchausti, C.-s. Han, E. Jeuland, R. Marcus, V. Smith, A. Stadler, M. Strandberg, M. Stürner, I. Tzankova, N. Von Hinten Reed, S. Voet, H. Zaneti Jr.

2. The concept of ‘party’
Emmanuel Jeuland

8. Case management and the role of the judge
Magne Strandberg and Vincent Smith