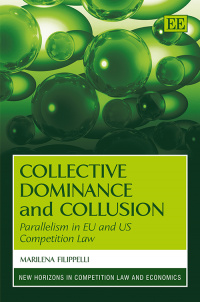 Parallelism in EU and US Competition Law

More Information
Critical Acclaim
Contents
More Information
By examining the issue of collusion in EU and US competition law, this book suggests possible strategies for improving the antitrust enforcement against parallelism, by exploiting the most advanced achievements of economic analysis.

The book contains a suggested approach to collusion, in ex ante and ex post perspectives. By moving from the analysis of the state of art, in terms of law, case law, and scholarship, Marilena Filippelli analyses inconsistencies and failures in the current antitrust enforcement toward collusion and develops a workable parameter for the issue of collective dominance. The most innovative part of this work goes beyond the analysis of collective dominance itself and involves the interference of arts. 101 and 102. The conclusion is a re-definition of the relationship between those rules—from dichotomy to redundancy. Finally, the book highlights the antitrust significance of semi-collusion as a strategy made of collusion and competition. The author considers economic models equalling, as for the effects, collusion and semi-collusion and the case law supporting the qualification of semi-collusion as a species of collusion. The analysis involves both US and EU systems under the highly topical economic-oriented approach. It also contains an original view of European antitrust prohibitions.

Because of its contents and its approach, this book will be attractive to every academic interested in antitrust law. Moreover, the well-documented research on parallelism, involving law, case law and scholarship, makes this book interesting also for competition authorities and antitrust lawyers.
Critical Acclaim
‘This book treats one of the thorniest issues in contemporary antitrust theory: the role of tacit collusion among oligopolistic undertakings and the instruments to apply competition law against its harmful consequences. The author builds a very thorough parallel among US and European legal traditions, enforcement possibilities and concrete choices against tacit collusion. The result is an advanced and entertaining reading to be recommended both to lawyers and economists that study and practice antitrust.’
– Pier Luigi Parcu, European University Institute, Italy