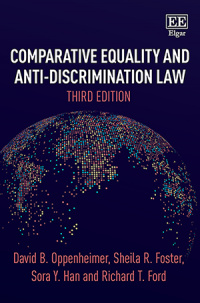 More Information
Critical Acclaim
Contributors
Contents
More Information
This revised and updated casebook comprehensively compares the U.S. legal approach to problems of inequality and discrimination with the approaches of a variety of other legal systems around the world, including those in Europe, South Africa, China, Colombia, India and Brazil. This book provides an introduction to theories of equality and sources of equality law, and examines inequality and discrimination based on gender, race, ethnicity, sexual orientation and identity, religion and disability.

Written in a thorough yet accessible style and with contributions from leading international legal scholars, this casebook is ideal for lecture courses, seminars and summer programs in equality and anti-discrimination in law schools, as well as undergraduate courses in law, political science and sociology.

Critical Acclaim
‘This book provides a unique contribution to the practice of equality and non-discrimination in different jurisdictions. It fosters a strategic use of comparative law. Such a global approach to anti-discrimination law promotes the diffusion of legal arguments which transform the principle of equality. A must read for lawyers and academics eager to achieve social justice.’
– Isabelle Rorive, Université Libre de Bruxelles, Belgium