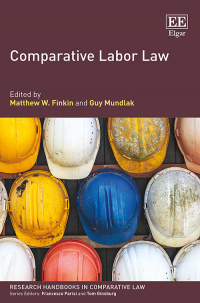 More Information
Critical Acclaim
Contributors
Contents
More Information
Economic pressure, as well as transnational and domestic corporate policies, has placed labor law under severe stress. National responses are so deeply embedded in institutions reflecting local traditions that meaningful comparison is daunting. This book assembles a team of experts from many countries that draw on a rich variety of comparative methods to capture changes and emerging trends across nations and regions.

The chapters in this Research Handbook mingle subjects of long-standing comparative concern with matters that have pressed to the fore in recent years. Subjects like “soft law” and emerging geographic zones are placed in a new light and their burgeoning significance explored. Thematic and regional comparisons capture the challenges of a globally comparative perspective on labor law.

The fresh and thoughtful comparative analysis in this Handbook makes it a critical resource for scholars and students of labor law.

Critical Acclaim
‘This important book will be essential reading for all those who wish to understand the reasons for the continuing divergences and similarities between national systems of labor law in the age of modern globalisation and the growing influences of global competition, internationalisation and regionalisation on labor standards and processes. The authors not only provide new and sometimes provocative insights into traditional topics such as freedom of association, workers’ representation and the personal contact of employment, but also newer areas such as workplace discrimination, privacy and new forms of contracting.’
– Sir Bob Hepple, QC, FBA, University of Cambridge, UK

3. The Challenge to Comparative Labor Law in a Globalized Era
Kerry Rittich and Guy Mundlak

5. Who is an Employer?
Luisa Corazza and Orsola Razzolini

8. The Lasting Influence of Legal Origins: Workplace Discrimination, Social Inclusion and the Law in Canada, the United States and the European Union
Kevin Banks, Roberta Nunin and Adriana Topo

13. Labor Law in Transition: From a Centrally Planned to a Free Market Economy in Central and Eastern Europe
Erika Kovács, Nikita Lyutov and Leszek Mitrus