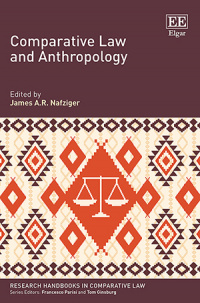 9781781955178 Edward Elgar Publishing
Research Handbooks in Comparative Law series
Edited by James A.R. Nafziger, Thomas B. Stoel Chairholder, Professor of Law and Director of International Law Programs, Willamette University College of Law, US and Honorary President, International Association of Sports Law
Publication Date: 2017 ISBN: 978 1 78195 517 8 Extent: 544 pp
The topical chapters in this cutting-edge collection at the intersection of comparative law and anthropology explore the mutually enriching insights and outlooks of the two fields. Comparative Law and Anthropology adopts a foundational approach to social and cultural issues and their resolution, rather than relying on unified paradigms of research or unified objects of study. Taken together, the contributions extend long-developing trends from legal anthropology to an anthropology of law and from externally imposed to internally generated interpretations of norms and processes of legal significance within particular cultures. The book's expansive conceptualization of comparative law encompasses not only its traditional geographical orientation, but also historical and jurisprudential dimensions. It is also noteworthy in blending the expertise of long-established, acclaimed scholars with new voices from a range of disciplines and backgrounds.

More Information
Critical Acclaim
Contributors
Contents
More Information
This cutting-edge Research Handbook, at the intersection of comparative law and anthropology, explores mutually enriching insights and outlooks. The 20 contributors, including several of the most eminent scholars, as well as new voices, offer diverse expertise, national backgrounds and professional experience. Their overall approach is "ground up" without regard to unified paradigms of research or objects of study.

Through a pluralistic definition of law and multidisciplinary approaches, Comparative Law and Anthropology significantly advances both theory and practice. The Research Handbook’s expansive concept of comparative law blends a traditional geographical orientation with historical and jurisprudential dimensions within a broad range of contexts of anthropological inquiry, from indigenous communities, to law schools and transitional societies.

This comprehensive and original collection of diverse writings about anthropology and the law around the world offers an inspiring but realistic source for legal scholars, anthropologists and policy-makers.

6. The hybridity of law in Namibia and the role of community law in the Southern African Development Community (SADC)
Oliver C. Ruppel and Katharina Ruppel-Schlichting

10. Governance disputes involving First Nations in Canada: culture, custom, and dispute resolution outside of the Indian Act
William B. Shipley

15. A trinity of culture, law and politics: legal anthropology of the bonded labor system in Nepal
Upendra D. Acharya

17. An historical, cultural and political perspective of corruption in the Balkans
Marko Novaković

20. The voice of the stranger: foreign LL.M. students’ experiences of culture, law and pedagogy in US law schools
Mindie Lazarus-Black