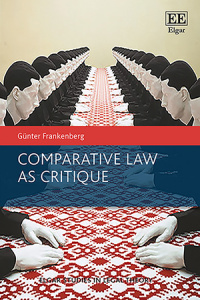 9781789902174 Edward Elgar Publishing
Elgar Studies in Legal Theory
Günter Frankenberg, Goethe University, Frankfurt am Main, Germany
Publication Date: 2019 ISBN: 978 1 78990 217 4 Extent: 296 pp
This book presents a critique of conventional ways to do comparative law. The author argues that, for comparative law to qualify as a discipline, comparatists must reflect on how and why they compare. The author discusses not only methods and theories, but also the ethical implications and the politics of comparative law.

More Information
Critical Acclaim
Contents
More Information
Presenting a critique of conventional methods in comparative law, this book argues that, for comparative law to qualify as a discipline, comparatists must reflect on how and why they make comparisons. Günter Frankenberg discusses not only methods and theories, but also the ethical implications and the politics of comparative law in bringing out the different dimensions of the discipline.

Comparative Law as Critique offers various approaches that turn against the academic discourse of comparative law, including analysis of a widespread spirit of innocence in terms of method, and critique of human rights narratives. It also examines how courts negotiate differences between cases regarding Muslim veiling.

The incisive critiques and comparisons in this book will be of essential reading for comparatists working in legal education and research, as well as students of comparative law and scholars in comparative anthropology and social sciences.
Critical Acclaim
‘A leading figure in critical legal studies and renowned scholar of comparative constitutionalism, Frankenberg urges us forward, offering a new taxonomy for critical work. He illustrates its potential in terrific chapters on recent transnational legal movements: to regulate the veil, provide access to justice and reinvigorate human rights as a language of justification. A methodological tour de force.’
– David Kennedy, Harvard University, US

‘One of the most courageous and intellectually earnest legal scholars of our time, Günter Frankenberg, has devoted his efforts to reconstructing comparative law’s internal strength and potential for critical analysis. This book is a masterpiece that should be read by every serious thinker concerned with the need for legal reforms and the politics of globalization.’
– Pier Giuseppe Monateri, University of Turin, Italy

‘Globalization has made legal comparison fashionable, but in the mainstream varieties practiced within institutional settings or by surviving nineteenth century sociétés savantes, it involves, at best, a superficial overview of national practices in a quest for similarities (not differences), and at worst, an apology of the exclusionary dynamics at work in the act of comparison. While Frankenberg’s acutely critical view draws attention to the political and epistemological implications of existing methodologies, it also provides the foundations of a renewed intellectual enterprise, thereby joining the outstanding scholarship of Legrand, Samuel or Monateri in what might be termed “New Approaches to Comparative Law”.’
– Horatia Muir Watt, Sciences Po Law School, France

‘Comparative Law as Critique should be read by everyone interested or engaged in legal comparison. The intellectual condescension towards those who have not been converted to post-modernism that shines through, typical of the amorphous congregation of crits, must not dissuade established comparatists from taking this book very seriously.’
– Journal for European, Private International and Comparative Law

‘Comparative Law as Critique should be read by everyone interested or engaged in legal comparison. It is not far-fetched to declare that this overview of comparative work in law is more instructive than many a voluminous conventional ‘comparative law handbook.’ ’
– Zeitschrift für ausländisches öffentliches Recht und Völkerrecht