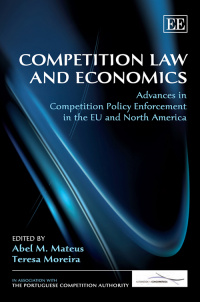 Advances in Competition Policy Enforcement in the EU and North America

9781848449992 Edward Elgar Publishing
Edited by Abel M. Mateus, former President of the Portuguese Competition Authority, Professor of Economics, New University of Lisbon, Portugal, Visiting Professor, University College of London, UK and New York University, US and Teresa Moreira, UNCTAD - Palais des Nations, Switzerland
Publication Date: 2010 ISBN: 978 1 84844 999 2 Extent: 456 pp
Competition policy is at a crossroads on both sides of the Atlantic. In this insightful book, judges, enforcers and academics in law and economics look at the consensus built so far and clarify controversies surrounding the issue.

More Information
Critical Acclaim
Contributors
Contents
More Information
Competition policy is at a crossroads on both sides of the Atlantic. In this insightful book, judges, enforcers and academics in law and economics look at the consensus built so far and clarify controversies surrounding the issue.

There is broad consensus on the fight against cartels, with some countries criminalizing this type of agreement. However there is also wide debate on the questions of monopolization and abuse of dominant position, vividly highlighted by the recent Microsoft case. Furthermore, there are today diverging views on the interplay of business strategies and the control of market power on both a national and international scale. The book discusses the perennial issue in Europe of the conflicts between competition and industrial policies, once again bringing the theme of national champions to the fore. The contributing authors provide opinion on the efforts which have been made towards modernization in both the USA and the EU.

Featuring new contributions by leading scholars and practitioners in antitrust, this book will be a great resource for antitrust enforcers, competition lawyers and practitioners and competition economists, as well as scholars and graduate students in antitrust and competition law.
Critical Acclaim
‘This book offers a wealth of thoughts and insights on the law and economics of competition policy enforcement in the EU and North America. Most papers are easily accessible to non-specialist readers, and even the economists’ papers are written in a non-technical fashion. The book therefore makes attractive reading for anyone interested in the enforcement of competition policy.’
– Stefan Buehler, Jahrbucher für Nationalökonomie und Statistik

‘The book will be of immense value for practitioners of economics and law, as well as to officials of national competition authorities, and non-governmental organisations dealing with consumer protection and competition law. Students of law and economics interested of competition law will also be likely to read this volume with much attention.’
– Csilla Bónis, Acta Oeconomica

‘. . . the book provides a fascinating and perceptive discussion of the judicial control of administrative decisions and the differing approaches in common and civil law jurisdictions. . . Every chapter is written by an outstanding thinker on the most important controversial issues of competition policy at the time of the conference. . . those concerned with competition policy, academics and practitioners will greatly enjoy the book. It is lively and lucid and includes much new thinking.’
– Valentine Korah, World Competition

‘Mateus and Moreira present a formidable review of pressing issues in competition law and economics. Top officials, judges and experts from Europe and North America offer their insights into analytical issues, practical problems for companies, enforcers and complainants on the state of trans-Atlantic divergence and convergence. The discussion on national champions and state aid is prescient. Throughout, the analysis is acute, cutting edge, and deep. Officials, counsel and scholars will draw from this fabulous book for years to come.’
– Philip Marsden, British Institute of International and Comparative Law, London, UK

PART I: OPENING SPEECHES
1. Speech by the President of the Republic at the Opening Session of the Second Lisbon Conference on Competition Law and Economics
Aníbal Cavaco Silva

3. Competition Policy and Consumer Protection in the EU
Meglena Kuneva

8. The Effectiveness and Limitations of the Portuguese System of Competition Law Enforcement by Administrative and Civil Procedural Means
José Manuel Sérvulo Correia

13. Abuses of Dominant Position, Intellectual Property Rights and Monopolization in EU Competition Law: Some Thoughts on a Possible Course of Action
Inge Govaere

15. The Current Debate About Section 2 of the Sherman Act: Judicial Certainty versus Rule of Reason
Barry E. Hawk

PART VI: COMPETITION AND INDUSTRIAL POLICIES IN A GLOBALIZED WORLD
18. Do National Champions Have Anything to do with Economics?
Anne Perrot

24. The New Approach to State Aid: Contributions and Limits from Case Law of the European Courts
Massimo Merola and Marie Debieuvre