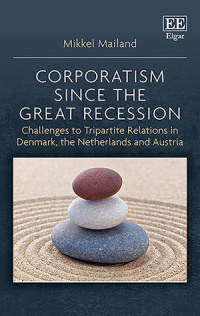 Challenges to Tripartite Relations in Denmark, the Netherlands and Austria

9781788114554 Edward Elgar Publishing
Mikkel Mailand, Associate Professor and Research Director, Employment Relations Research Centre (FAOS), Department of Sociology, University of Copenhagen, Denmark
Publication Date: 2020 ISBN: 978 1 78811 455 4 Extent: 192 pp
In the comparative study of Denmark, the Netherlands and Austria, Mikkel Mailand explores the roles of social partners in regulating work and welfare through corporatist arrangements. This insightful book illustrates how the frequency of tripartite agreements has either been stable or has increased since the Great Recession of 2008, in spite of challenges from trade unions’ loss of power and political developments. It will be an invaluable read for academics and students in industrial relations, political economy and other social science disciplines addressing the formulation of work and welfare related policies.

In the comparative study of Denmark, the Netherlands and Austria, Mikkel Mailand illustrates how the frequency of tripartite agreements has either been stable or has increased since the Great Recession of 2008, in spite of challenges from trade unions’ loss of power and political developments. He therefore demonstrates that social partners are still strong enough to be included in corporatist arrangements. Moreover, the book posits that economic crisis in a 30 year perspective appears a stronger explanatory factor for corporatist development than social partner strength, government strength and government ideology.

Using qualitative methods to offer a nuanced insight into corporatism within these countries, Corporatism since the Great Recession will be a useful read for both academics and students in industrial relations, political economy and other social science disciplines addressing the formulation of work and welfare related policies.

Critical Acclaim
‘This book provides a needed sober analysis of the state of corporatism since the Great Recession. Carefully tracing tripartite policy-making in Denmark, the Netherlands and Austria, it shows how and why social partners continue to play an important role in small European countries despite economic crisis, globalisation and Neoliberalism. The book is ideal for students and researchers in comparative politics, comparative political economy, employment relations and comparative sociology.’
– Christian Lyhne Ibsen, Michigan State University, US

'Mikkel Mailand’s book provides an important and welcome addition to the existing scholarship on corporatism and tripartite policy policymaking. His theoretically grounded framework informs his detailed and careful empirical analysis of the role of tripartism in the Netherlands, Austria, and Denmark since the Great Recession. Mailand reminds us that despite conventional wisdom, tripartite agreements are not dead, and identifies core factors that encourage continued corporate policy making. The book makes an important contribution not just to scholars interested in the country case studies, but also to those engaged in the theoretical discussion of the future of corporatism.’
– Kerstin Hamann, University of Central Florida, US

‘Will the triple threats of globalization, neoliberalism and deindustrialization put an end to the labor market coordination that once enabled high levels of growth and equality? This deeply revealing and well-researched book suggests that cooperative arrangements remain a fact of life in Denmark, the Netherlands and Austria. Strong state bureaucrats mobilize well-organized social partners to embrace higher rather than lower levels of coordination to cope with economic challenges. Corporatism since the Great Recession is a must-read for anyone searching for win-win solutions to the anxieties of our contemporary world.’
– Cathie Jo Martin, Boston University, US
Contents
Contents: Foreword 1. Introduction 2. Theoretical framework and methods 3. Denmark – Informal tripartism and few social pacts 4. The Netherlands – Formal tripartite structures and weakened trade unions 5. Austria – Political challenges to the corporatist country par excellence 6. Comparison and conclusions References Index