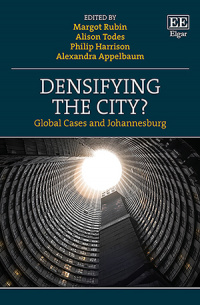 9781789904932 Edward Elgar Publishing
Edited by Margot Rubin, University of Cardiff, UK, Alison Todes, Philip Harrison and Alexandra Appelbaum, School of Architecture and Planning, University of the Witwatersrand, South Africa
Publication Date: 2020 ISBN: 978 1 78990 493 2 Extent: 304 pp
Providing an in-depth exploration of the complexities of densification policy and processes, this book brings the important experiences of densification in Johannesburg into conversation with a range of cities in Africa, the BRICS countries and the Global North. It moves beyond the divisive debate over whether densification is good or bad, adding nuance and complexity to the calls from multilateral organisations for densification as a key urban strategy.

Using empirical work in a comparative frame, Densifying the City? examines how densification policies and processes have manifested often in unanticipated or contrary ways. It offers important insights into resident-led densification and the processes and motivations that drive these activities.

This will be an invigorating read for urban studies and urban planning scholars looking to move beyond a basic understanding of densifying cities to understanding the strategy behind it and its successes. Urban policy makers will also appreciate the use of key case studies throughout the book.
Critical Acclaim
‘This collection is a recommended read for people who seek an excellent overview of South African urbanism and beyond with an interest in urban socio-technical instruments. Given the breadth of analytical genres and the empirical richness of this book, it will help urban practitioners, scholars, and students to explore the relationship between theoretical and practical considerations of urban densification and to advance both for a more just and sustainable urban future.’
– Hung-Ying Chen, Eurasian Geography and Economics

‘Densification is increasingly positioned as vital to cities and the global urban future. This collection of cases, from across the urban world, offers an invaluable critique of the politics and geographies of densification, and provides a set of progressive routes forward.’
– Colin McFarlane, Durham University, UK