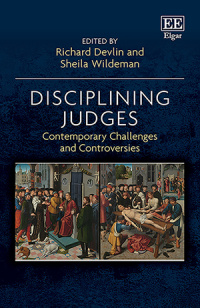 The jurisdictions examined are Australia, Canada, China, Croatia, England and Wales, India, Italy, Japan, the Netherlands, Nigeria, Poland, South Africa, and the United States. The core findings are four-fold. First, the norms and practices of each discipline regime differ in ways that reflect distinct social, political, and cultural contexts. Second, some jurisdictions are doing better than others in responding to challenges of designing a nuanced and normatively defensible regime. Third, no jurisdiction has yet managed to construct a regime that can be said to adequately promote public confidence. Finally, important lessons can be learned through analysis of, and critically constructive engagement with, other jurisdictions.

Critical Acclaim
‘In this wonderful collection of essays and reports on a wide range of judicial discipline systems, we can find evidence that more successful systems share much in common: a proper balance between independence and accountability, and an underlying determination to enforce discipline in fair and impartial ways. In less successful systems, the lack of success seems to come from various flaws such as a too-narrow window of those empowered to bring complaints against judges, a lack of detail in the language of disciplinary and ethical codes, and too great a reliance on the idea that good judges have the goodness inside and need little or no external description via code of what makes a judge good.
It seems not to matter for success that the right principles are spoken of in codes, as this may be the single most consistent feature of judicial discipline systems, regardless of their level of success. This collection is a must-read for anyone seriously interested in the good functioning of judicial systems across the globe.’
– James E. Moliterno, Washington and Lee University School of Law, US

'Disciplining Judges represents a new and important contribution to the fields of public law and judicial studies. It positions judicial discipline as an essential component of constitutionalism and the rule of law. This marvellous collection of diverse essays probes the shifting power dynamics through which the judicial, executive and legislative branches interact.’
– Dean Adam Dodek, University of Ottawa, Canada

How To Master English as a Multilingual