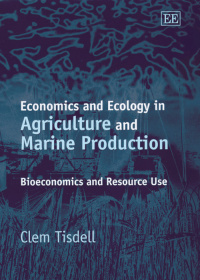 Economics and Ecology in Agriculture and Marine Production

Bioeconomics and Resource Use

More Information
Critical Acclaim
Contents
More Information
In this new book, Clem Tisdell considers combined economic and ecological influences on levels of agricultural and marine production, their variations and sustainability. The book consists mainly of previously published articles gathered together for the first time, while also including new chapters written especially for this collection.

The book begins with an overview of the field, followed by an examination of the choice of variety of species for variable environments, new crops and diversification, production and impacts of economic and ecological factors on agricultural production generally. It goes on to consider specific aspects of pest and disease control in agriculture. The final part is devoted to bio-economic aspects of marine production. Interesting and often controversial topics include consequences and economic causes of genetic selection in agriculture, transgenic crops (GMOs), and effects of aquaculture on levels of wild fish stocks.

Interdisciplinary in nature, Economics and Ecology in Agriculture and Marine Production covers a broad range of subjects and will attract a wide readership. It will therefore appeal to ecological, agricultural, environmental and natural resource economists, while also being of interest to those involved in land and food science, fisheries and marine studies.
Critical Acclaim
‘Overall, this is a valuable if initially eclectic set of essays, reﬂecting as they do Clem Tisdell’s lifetime search for issues that can be illuminated by a mixed economic and ecological approach, but which have tended to be ignored by more conventional colleagues. Anyone not familiar with Tisdell’s work would do well to secure this volume and dip into it every now and again.’
– David Pearce, Biodiversity and Conservation

Research Handbook of Innovation for a Circular Economy

Research Handbook on Energy and Society