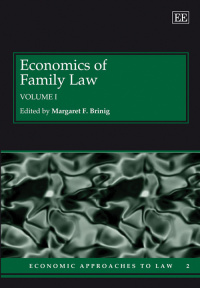 9781845424398 Edward Elgar Publishing
Economic Approaches to Law series
Edited by Margaret F. Brinig, Fritz Duda Professor of Law, Notre Dame Law School, Notre Dame University, US
Publication Date: 2007 ISBN: 978 1 84542 439 8 Extent: 1,040 pp
The articles within this book explore a range of family law issues and include discussions on a variety of topics including cohabitation, births outside marriage, courtship, premarital contracting, marriage and parenting. The volume includes papers on the division of responsibilities between family and state, the effects of no-fault divorce, alimony, property division and child custody. There are also works on intergenerational transfers and the elderly.

More Information
Critical Acclaim
Contributors
Contents
More Information
Economists have studied numerous fields of law for many years, but family law was virtually neglected until the early 1970s. It was only relatively recently that economic insights about the family crept into the consciousness of those involved in legal research.

The articles within this book explore a range of family law issues and include discussions on a variety of topics including cohabitation, births outside marriage, courtship, premarital contracting, marriage and parenting. The volume includes papers on the division of responsibilities between family and state, the effects of no-fault divorce, alimony, property division and child custody. There are also works on intergenerational transfers and the elderly.

The collection contains articles written by leading authorities in the field and provides a stimulating exploration of the subject of family law and economics. The book will be accessible to a wide audience, including students of law and economics, as well as both academic and practising lawyers. The questions posed in this volume are worthy of consideration by the next generation of academics.
Critical Acclaim
‘Economics of Family Law, edited by Margaret Brinig is an indispensable source of legal information on every aspect of unions, but it is particularly important for the point of divorce.’
– Darius Conger, ‘Economics and the American Family: A Review of Recent Literature’, Choice

PART I BEFORE MARRIAGE AND PARENTHOOD
A Outside Family Institutions
1. George A. Akerlof, Janet L. Yellin and Michael L. Katz (1996), ‘An Analysis of Out-of-Wedlock Childbearing in the United Sates’
2. Elisabeth M. Landes and Richard A. Posner (1978), ‘The Economics of the Baby Shortage’
3. Margaret F. Brinig (1990), ‘Rings and Promises’
4. Margaret F. Brinig and Steven L. Nock (2004), ‘Marry Me, Bill: Should Cohabitation be the (Legal) Default Option?’
5. Stéphane Mechoulan (2006), ‘Divorce Laws and the Structure of the American Family’
B Choice of Spouse and Premarital Bargaining
6. Margaret F. Brinig and Michael V. Alexeev (1995), ‘Fraud in Courtship: Annulment and Divorce’
7. Douglas W. Allen (1992), ‘What Does She See in Him? The Effect of Sharing on the Choice of Spouse’
8. Amy L. Wax (1997), ‘Bargaining in the Shadow of the Market: Is There a Future for Egalitarian Marriage?’

PART II PARENTING AND BEING MARRIED
A Family and State
9. Gary S. Becker and Kevin M. Murphy (1988), ‘The Family and The State’
10. Elizabeth S. Scott and Robert E. Scott (1995), ‘Parents as Fiduciaries’
11. Jennifer Roback Morse (1995), The Development of the Child, Prepared for the Liberty Fund Symposium: The Family, the Person and the State
B The Family Firm
12. Steven L. Nock and Margaret F. Brinig (2002), ‘Weak Men and Disorderly Women: Divorce and the Division of Labor’
13. Brian H. Bix (2001), ‘How to Plot Love on an Indifference Curve’
14. Saul Levmore (1995), ‘Love It or Leave It: Property Rules, Liability Rules, and Exclusivity of Remedies in Partnership and Marriage’
C The Unhappy Family
15. Shelly Lundberg and Robert A. Pollak (1993), ‘Separate Spheres Bargaining and the Marriage Market’
16. Allen M. Parkman (1998), ‘Why are Married Women Working So Hard?’

PART I DIVORCE AND THE DIVORCE PROCESS
A When and Why People Divorce
1. Gary S. Becker, Elisabeth M. Landes and Robert T. Michael (1977), ‘An Economic Analysis of Marital Instability’
2. Lloyd Cohen (1987), ‘Marriage, Divorce and Quasi-Rents; Or “I Gave Him the Best Years of My Life”’
3. H. Elizabeth Peters (1986), ‘Marriage and Divorce: Informational Constraints and Private Contracting’
4. Douglas W. Allen (1992), ‘Marriage and Divorce: Comment’
5. Leora Friedberg (1998), ‘Did Unilateral Divorce Raise Divorce Rates? Evidence From Panel Data’
B The Role of Law and the Divorce Process
6. Margaret F. Brinig and Douglas W. Allen (2000), ‘“These Boots are Made for Walking”: Why Most Divorce Filers Are Women’
7. Yoram Weiss and Robert J. Willis (1993), ‘Transfers Among Divorced Couples: Evidence and Interpretation’
8. Yoram Weiss and Robert J. Willis (1985), ‘Children as Collective Goods in Divorce Settlements’
9. Allen M. Parkman (1995), ‘Human Capital as Property in Celebrity Divorces’
10. Elisabeth M. Landes (1978), ‘Economics of Alimony’