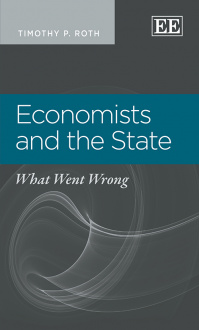 Economists and the State

9781781951927 Edward Elgar Publishing
Timothy P. Roth, A.B. Templeton Professor and Chairman, Department of Economics and Finance, University of Texas, El Paso, US
Publication Date: 2014 ISBN: 978 1 78195 192 7 Extent: 192 pp
Adam Smith is widely regarded as the ‘founder of modern economics’. The author shows, however, that Smith’s procedurally based, consequence-detached political economy, an approach shared by America’s Founders, finds no expression in the economist’s utilitarian, procedurally-detached theory of the state. This ‘wrong turn’ has meant that, if economists are ill-equipped to address an expanding federal enterprise in which utilitarian considerations trump the Smithian/Madisonian idea that means and ends must be morally and constitutionally constrained, they are also ineffectual bystanders as growing institutional skepticism, demands for ‘social justice’ and metastasizing rights claims threaten our self-governing republic.

More Information
Critical Acclaim
Contents
More Information
Economists and the State shows how modern economists have strayed far from Adam Smith’s procedurally based, consequence-detached political economy. Timothy P. Roth argues that this “wrong turn” has left economists ill-equipped to address an expanding federal enterprise and new threats to our self-governing republic. He subsequently sets out to offer ways to redress this.

Making the case for a return to the moral and political philosophy that informed Adam Smith’s ‘science of the statesman or legislator,’ this book argues that economists must reject their relentlessly utilitarian, teleological theory of the state and embrace Nobel Laureate James M. Buchanan’s constitutional political economy project. The author outlines the specific requirements of a non-teleological conception of the state – a conception that is vital to the continuing development of a theory of the state informed by a prior ethical commitment to the moral equivalence of persons.

This book will appeal to scholars and students of political economy, political thought, public choice economics and Austrian economics as well as to practitioners and policy-makers interested in how economics should support those serving the public.

Critical Acclaim
‘Author Timothy Roth shows that the federal government is being run in a sinister and criminal manner, not a legal one. This serious book reports on "what went wrong," dishes out some of the blame to the mainstream economics profession, and even provides some possible remedies.’
– Quarterly Journal of Austrian Economics

‘Informative and insightful and deserve attention from scholars in the fields of economic history, philosophy of economics, and public policy’
– Kevin Schmiesing, History and Philosophy of Economics

‘This important book presents a compelling case that traditional received theory (Paretian-utilitarian) has followed a dangerous path – one not espoused by Adam Smith and Nobel Laureate James Buchanan. The latter viewed value and preferences as mutable (not "given") and believed that rights systems must underlie moral law and impartial justice. Men must be "taken as they are" in this system. Adoption of the Smith-Buchanan paradigm, Professor Roth brilliantly argues, leads to the kind of moral and political philosophy that informs the science of statutes and legislators that underpins our Founding Fathers' republican self-government project.’
– Bob Ekelund, Auburn University, US
Contents
Contents: Preface 1. The Smithian Inheritance 2. Institutions Matter 3. What Economists Do 4. The Founders’ Republican Self-government Project Derailed 5. What Has Been Wrought 6. What Went Wrong 7. What Should Economists Do? References Index
Add to Wish List
eBook for individuals
978 1 78195 193 4
From $40.00
Click here for options
eBook for library purchase
978 1 78195 193 4
View sample chapter and check access on: