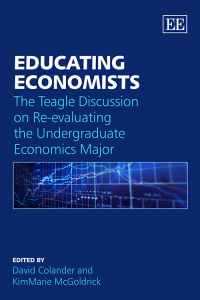 The Teagle Discussion on Re-evaluating the Undergraduate Economics Major

9781848445802 Edward Elgar Publishing
Edited by David Colander, Christian A. Johnson Distinguished Professor of Economics, Middlebury College, US and KimMarie McGoldrick, Joseph A. Jennings Chair in Business, Professor of Economics, University of Richmond, US
Publication Date: 2010 ISBN: 978 1 84844 580 2 Extent: 272 pp
The economics major is a central part of a college education. But is that economics major doing what it is meant to do? And if not, how should it be changed? This book raises a set of provocative questions that encourage readers to look at the economics major in a different light than it is typically considered and provides a series of recommendations for change.

Responding to a Teagle Foundation initiative on the role of majors in higher education, the contributors – eminent economists and administrators – consider the relationship between the goals and objectives of the economics major and those of a liberal education. They address questions such as: What is the appropriate training for a person who will be teaching in a liberal arts school? What incentives would motivate the creation of institutional value through teaching and not simply research? They also explore whether the disciplinary nature of undergraduate education is squeezing out the ‘big-think’ questions, and replacing them with ‘little-think’ questions, and whether we should change graduate training of economists to better prepare them to be teachers, rather than researchers.

Providing a stimulating discussion of the economics major by many of the leaders in US economic education, this book will prove a thought provoking read for those with a special interest in economics and economics education, particularly academics, lecturers, course administrators, students and researchers.
Critical Acclaim
‘The volume, full of thoughtful ideas by academic economists and administrators, is the outgrowth of a 2006 Teagle Foundation grant to help enrich undergraduate education. . . I recommend that this book be shared among colleagues in undergraduate liberal arts colleges with economics majors to initiate or further discussions on the appropriate goals and objectives of the major vis-à-vis liberal education. Doctoral and Master’s comprehensive universities with undergraduate economics majors and accredited business schools would still find the discussions in Educating Economists useful in thinking creatively about appropriate undergraduate and graduate economics skills and content, especially to train future undergraduate professors.’
– Deborah M. Figart, Eastern Economic Journal

‘This volume is an excellent outcome of an American Economic Association Committee for Economic Education project aimed at advancing the teaching of economics within a liberal arts context. Dave Colander and KimMarie McGoldrick assembled a most able panel of contributors for this effort that includes dialogue on what should be taught, how it should be taught, and how that teaching and learning should be assessed and rewarded. To the editors’ credit, they have not attempted to dictate policy but to stimulate debate on the topics. This volume is a must read for anyone seriously interested in the teaching of economics at the tertiary level.’
– William E. Becker, Indiana University, Bloomington, US
Contributors
Contributors: B.W. Bateman, D.W. Breneman, D. Colander, M. Dahal, G. Daly, B.M. Friedman, R. Fuld, R.F. Garnett, A.H. Goldsmith, P.W. Grimes, W.L. Hansen, C. Hill, E. Hoest, J. Holmes, S. Jones, D. Kennett, M. Maier, S.A. Marglin, K. McGoldrick, B. O’Flaherty, A.L. Owen, J. Persky, M.K. Salemi, J.J. Siegfried, S. Simkins, N.T. Skaggs, M. Watts, J. Wible, J.B. Wight
Contents
Contents:

Introduction: A Discussion, Not a Report
David Colander and KimMarie McGoldrick

PART I: THE TEAGLE REPORT
1. The Teagle Foundation Report: The Economics Major as Part of a Liberal Education
David Colander and KimMarie McGoldrick

PART II: CHALLENGING THE CONTENT: WHAT DO WE TEACH?
2. Teaching Students to ‘Think About the Economy’
Joseph Persky

3. The Economics Major as Illiberal Education
Stephen A. Marglin

5. Thinking for Yourself, Like an Economist
Robert F. Garnett

6. Teaching Economics Students as if they are Geniuses
James Wible

7. The Role for Depth in a Liberal Education
Benjamin M. Friedman

11. Economics and Liberal Education: Why, Where, and How
Michael K. Salemi

PART IV: STRUCTURAL PROBLEMS AND THE INTERDISCIPLINARY NATURE OF ECONOMICS
13. The Integrative Nature of the Economics Major
Jessica Holmes

14. The Availability of Interdisciplinary Economics Educators and the Actions of Deans: Explaining the Small Contribution of Economics to a Liberal Education
Arthur H. Goldsmith

15. The Economics Major at a Crossroads
David Kennett

16. Crafting the Economics Major as an Exercise in Property Rights
Neil T. Skaggs

20. How the Shifting Landscape Affects our Students
David W. Breneman

21. The Role of Incentives (and Culture) in Rebalancing the Economics Major
Bradley W. Bateman