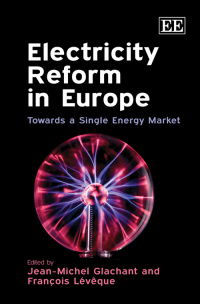 Towards a Single Energy Market

More Information
Critical Acclaim
Contributors
Contents
More Information
The realisation of a European internal market for energy is still a work in progress. Written by leading European scholars and discussed with major energy stakeholders, this book presents a thorough analysis of the motives and methods needed to achieve a single European energy market.

The authors discuss the critical issues surrounding an internal European energy market including: market design, competition and market power, sustainable energy versus the market, regulation and harmonisation, benchmarking and indicators, modelling of competition, market prices and energy forecasts. They provide a multi-disciplinary assessment of the ‘best way’ to build the market base of a future European energy policy.

Electricity Reform in Europe will be of great interest to decision makers and managers in the energy industry or business sector as they will be able to see the whole European energy policy ‘picture’ beyond their own corporate interests. The book will also appeal to national and European energy administrations, regulatory bodies and policy makers providing a synthesis of all relevant policy issues.
Critical Acclaim
‘. . . this volume comes across as one of the most profound sources on the specifics of European electricity market restructuring.’
– Christof Duthaler, Competition and Regulation in Network Industries

‘The SESSA study on the Internal Energy Market was an important and influential contribution towards the Commission’s proposal for a third package of proposals, intending to bring more effective competition and better security of supply to Europe’s energy markets. This volume, based on the results of the study is an important and welcome contribution to the ongoing debate on these proposals.’
– Andris Piebalgs, Commissioner for Energy at the European Commission

‘The chapters in this book are written by the leading European scholars who have studied the structure, behavior and performance of liberalised electricity markets in many European countries as well as in other regions of the world. Both the analyses and the policy recommendations contained in this volume are well worth careful consideration by policymakers in Europe, as well as by policymakers in other countries that are seeking to adopt successful electricity sector liberalisation programs.’
– From the foreword by Paul L. Joskow, Massachusetts Institute of Technology, US

‘The challenge of European electricity reform is being met, although gradually, delays notwithstanding. This book provides precious help in spotting where the necessary further efforts should be directed. In the US mistakes and delays have occurred, no less than in Europe, but an aggressive federal regulator (absent in Europe) is working to overcome them. Electricity markets do not happen, they have to be built. Here are suggestions for a workable European market design. No ideology, just competence and wisdom from both theory and experience. Will Europe learn?’
– Pippo Ranci, Università Cattolica del Sacro Cuore, Italy
Contributors
Contributors: E. Amundsen, J. Barquín, L. Bergman, P. Capros, J.-M. Glachant, R. Green, E. Hope, P.L. Joskow, F. Lévêque, A. Lorenzoni, L. Mantzos, D. Newbery, Y. Pérez, I. Pérez-Arriaga, M. Pollitt, B. Singh, Y. Smeers, J. Vasconcelos, C. Von Hirchhausen, G. Zachmann
Contents
Contents:

PART I: PROPOSALS FOR ACHIEVING THE EUROPEAN UNION ELECTRICITY MARKET BY 2009
1. The Electricity Internal Market in the European Union: What to do Next?
Jean-Michel Glachant and François Lévêque

10. Long-Term Scenarios for the Strategic Energy Policy of the EU
Pantelis Capros and Leonidas Mantzos