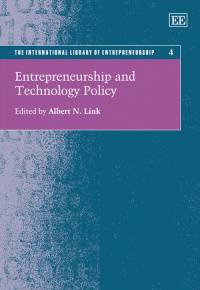 9781845423087 Edward Elgar Publishing
The International Library of Entrepreneurship series
Edited by Albert N. Link,Virginia Batte Phillips Distinguished Professor, University of North Carolina at Greensboro, US
Publication Date: 2006 ISBN: 978 1 84542 308 7 Extent: 384 pp
The terms entrepreneur and entrepreneurship take on a very specific and somewhat narrow meaning with regard to the connection between entrepreneurship and technology policy. In the context of this volume, entrepreneurship is defined to refer to the innovative and risk taking activities that are specific to small firms.

This authoritative volume is divided into four parts: Government’s Direct Support of R&D, Government’s Leveraging of R&D, Government’s Infrastructure Policies, and Knowledge Flows from Universities and Laboratories. Most of the journal articles are relatively new, being published since the mid- to late-1990s, but these key articles represent what could become the cornerstone for all future research related to entrepreneurship and technology policy.
Critical Acclaim
‘This is the fourth volume in Edward Elgar’s excellent series The International Library of Entrepreneurship, edited overall by David Audretsch. The stated purpose of the series is to bring together key articles from leading academics in specific areas, thereby providing a framework to underpin entrepreneurship as an important field of scholarship. . . it [this book] does stand up very well as an individual purchase in an important area that is not so well covered elsewhere. . . There is a great deal here that is accessible to the general reader, particularly one who is new to the area. . . As an academic, I would use it as a starting point for dissertation students at Master’s and undergraduate levels, as well as Master’s students on specialist courses in technology, its management and policy issues. . .’
– Lorraine Warren, Entrepreneurship and Innovation

How to Write Differently

Developments in Entrepreneurial Finance and Technology