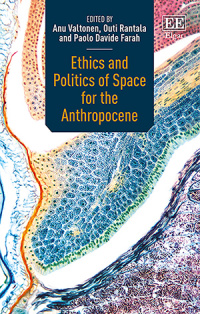 Ethics and Politics of Space for the Anthropocene

9781839108693 Edward Elgar Publishing
Edited by Anu Valtonen and Outi Rantala, Faculty of Social Sciences, University of Lapland, Finland and Paolo Davide Farah, West Virginia University, Eberly College of Arts and Sciences, John D. Rockefeller IV School of Policy and Politics, Department of Public Administration, US and gLAWcal – Global Law Initiatives for Sustainable Development, UK
Publication Date: 2020 ISBN: 978 1 83910 869 3 Extent: 240 pp
Featuring an international, multidisciplinary set of contributors, this thought-provoking book reimagines established narratives of the Anthropocene to allow differences in regions and contexts to be taken seriously, emphasising the importance of localised and situated knowledge. It offers critical engagement with the debates around the Anthropocene by challenging the dominant techno-rational agenda that often prevails in socio-political and academic discussions.

More Information
Critical Acclaim
Contributors
Contents
More Information
Featuring an international, multidisciplinary set of contributors, this thought-provoking book reimagines established narratives of the Anthropocene to allow differences in regions and contexts to be taken seriously, emphasising the importance of localised and situated knowledge.

Envisaging a narrative of change that renders visible the complex transformations taking place across the globe, this book outlines new and radical ways to address the current environmental crisis in a more sustainable and context-specific manner. It presents empirical studies from various contexts, highlighting the potentiality of non-Western knowledge, concepts and categories as well as recognising the entanglement of humans with other beings and ecosystems. In particular, it offers critical engagement with the debates around the Anthropocene by challenging the dominant techno-rational agenda that often prevails in socio-political and academic discussions.

This book will be crucial reading for researchers and postgraduate students working in fields from human geography and tourism studies to law, public policy and administration, philosophy, politics and organisation studies who are dealing with intersecting issues of environment, sustainability, indigenous rights, space and ethics. It will also be helpful for policymakers and research consultants in leveraging localised solutions to the current ecological crisis.
Critical Acclaim
'Have we run out of time to think and live differently? In this timely, globally relevant text, Valtonen, Rantala and Farah invite us to travel with them on a journey of human-earth relationships in relation to ethics, politics and space. Contributors have collectively produced a critical and provocative text which touches. Beautifully and sensitively written, readers will be inspired to radically question the ways in which we have contributed to capitalism's destruction of our planet. What matters is radically rethinking our being with human and non-human others as a political and ethical intervention.'
– Alison Pullen, Macquarie University, Australia

‘Ethics and Politics of Space for the Anthropocene brings us stories that plumb the depths of both theory and grounded insights from the margins of Europe and the Indian sub-continent. With surprising and novel relations generated, this refreshing mix of voices counters growth-based, techno-oriented business as usual at our current climatic juncture and gives perspectives as well as hopes for an uncertain future of our making.’
– Edward H. Huijbens, Wageningen University, the Netherlands
Contributors
Contributors: A. Bisht, F. Clingerman, P.D. Farah, G. Frigo, E. Höckert, A. Khanam, J. Lozanoska, M. Prityi, O. Rantala, P. Routledge, T. Salmela, T. Seppälä, A. Valtonen

1 Introduction: reimagining ways of talking about the Anthropocene 1
Anu Valtonen and Outi Rantala

PART II STORIES FROM MARGINALIZED COMMUNITIES
5 Rethinking knowledge, power, agency: learning from
displaced and slum communities in Bangladesh 72
Afroja Khanam and Tiina Seppälä
6 Spaces of climate justice: towards an ethical politics of
intervention in the Anthropocene 107
Paul Routledge
7 Between extractivism and sacredness: the struggle for
environmental inheritances by the Adivasi communities of India 124
Arpita Bisht

PART III LAW AND TECHNOLOGY
8 Beyond the Capitalocene: an ecocentric perspective for the
energy transition 150
Giovanni Frigo
9 Temporality, technology and justice in Hannah Arendt:
a critical approach 175
Jana Lozanoska
10 The Anthropocene and climate change in the post-Paris
Agreement debate 197
Paolo Davide Farah and Marek Prityi
11 The role of imagination, marginalized communities, law
and technology in building an ethical approach to the
Anthropocene 210
Paolo Davide Farah