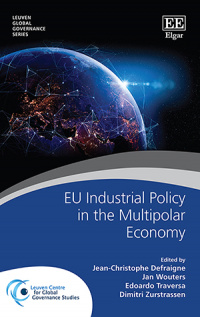 Comprehensive and analytical, the book investigates the long-term structural causes of the absence of a strong industrial policy at Union level. Examining the tensions that exist between member states and EU institutions regarding industrial and competition policies, expert contributions assess the conditions for an integrated EU industrial policy to emerge. A comparative analysis between the industrial policies of the EU, US, and China is developed as chapters explore how the EU maintains its position in global value chains while other major partners are forced to pursue strategic trade and industrial policies to retain their dominant position. The book concludes with a presentation of prospective scenarios to assess the future technological evolution of the EU.

EU Industrial Policy in the Multipolar Economy will be an essential resource for academics and practitioners concerned with EU current affairs, global governance, industrial economics, and international trade. Its use of case studies and original data will allow governments, EU institutions, NGOs and EU public affairs consultants and analysts to assess their policymaking options in the fields of research, industrial policy, and sustainable development.

Critical Acclaim
‘A timely book on a fundamental theme for the future of European sovereignty, which brings together experts from the academic world and practitioners of industrial policy. The various case studies on key industries, the historical and legal perspectives and the comparative analysis with the experiences of the US and China provide a deep insight into the workings and challenges of EU industrial policy in this 21st century. A must-read for all those who feel concerned about Europe’s strategic autonomy.’
– Romano Prodi, Professor Emeritus of Industrial Policy at the University of Bologna, Former Prime Minister of Italy and Former President of the European Commission

This book provides an in-depth analysis of the complex debate on the nature and scope of EU powers in the area of industrial policy, which finds its origins in different approaches followed by the Treaties of Paris and Rome and which is still not settled today. As a former Vice President of the European Commission directly involved in the making of European industrial policy, I congratulate the editors and authors for their pertinent and insightful analyses.’
– Etienne Davignon, Former Vice President of the European Commission and President of the Brussels-based think tank Friends of Europe
Contributors
Contributors include: Éric Bussière, Jean-Christophe Defraigne, Wouter Devroe, Samuel B.H. Faure, Pim Jansen, Samuel Klebaner, Julia Marssola, Franco Mosconi, Patricia Nouveau, Riccardo Perissich, Sigfrido Ramírez Pérez, Pierre M. Sabbadini, Edoardo Traversa, Jan Wouters, Dimitri Zurstrassen