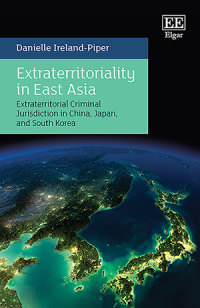 9781788976657 Edward Elgar Publishing
Danielle Ireland-Piper, Associate Professor, Faculty of Law, Bond University, Australia
Publication Date: 2021 ISBN: 978 1 78897 665 7 Extent: 168 pp
Extraterritoriality in East Asia examines the approaches of China, Japan and South Korea to exercising legal authority over crimes committed outside their borders, known as ‘extraterritorial jurisdiction’. It considers themes of justiciability and approaches to international law, as well as relevant examples of legislation and judicial decision-making, to offer a deeper understanding of the topic from the perspective of this legally, politically and economically significant region.

More Information
Critical Acclaim
Contents
More Information
Extraterritoriality in East Asia examines the approaches of China, Japan, and South Korea to exercising legal authority over crimes committed outside their borders. It considers examples of legislation and judicial decision-making and offers a deeper understanding of the topic from the perspective of this legally, politically, and economically significant region.

Beginning with a foundational overview of the principles of jurisdiction in international law, as well as identifying current challenges to those principles, subsequent chapters analyse the ways in which extraterritorial jurisdiction operates and is regulated in China, Japan, and South Korea.

Danielle Ireland-Piper contextualizes contemporary issues within a historical narrative of each country and concludes by exploring areas of convergence and divergence between them. This book will be of particular interest to scholars and students of comparative, criminal, constitutional, and international law, as well as international relations, especially in the context of East Asia. Law-makers and practitioners, such as criminal lawyers and prosecutors, will also find its contemporary analysis useful.

Critical Acclaim
‘Ireland-Piper’s book brings together three nations that have been under-studied in the English language literature, both individually and comparatively. Through concise and eloquent writing, Ireland-Piper has amply achieved her two stated aims. Readers will gain a contextualised understanding of how extraterritorial jurisdiction (especially vis-à-vis prescriptive extraterritorial criminal jurisdiction) operates in the three nations, and appreciate the convergences and divergences between them. In short, this book equips readers with a solid starting point for further research into this important subject.’
– Jianlin Chen, Australian Journal of Asian Law

‘In Extraterritoriality in East Asia: Extraterritorial Criminal Jurisdiction in China, Japan, and South Korea, Danielle Ireland-Piper has again demonstrated her comprehensive knowledge, and sharp analysis, of some of the most complex and most pressing legal issues of our time. Her insights, combined with those of her co-authors, and the clarity with which she expresses them, creates an invaluable resource both for those seeking to understand the law as it stands and for those who ponder how it can be improved.’
– Dan Svantesson, Bond University, Australia