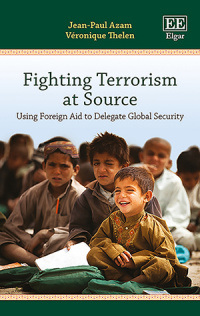 9781786432162 Edward Elgar Publishing
Jean-Paul Azam, Toulouse School of Economics, University of Toulouse 1-Capitole, IAST, IDEI and Véronique Thelen, University of Rennes 1 (CREM), France
Publication Date: 2018 ISBN: 978 1 78643 216 2 Extent: 200 pp
This book offers a unique and insightful econometric evaluation of the policies used to fight transnational terrorism between 1990 and 2014 using a sample of 124 countries. It proves that foreign aid plays a crucial role by inducing recipient governments to protect the donors’ political and economic interests within their sphere of influence. In contrast, US troops on the ground are counter-productive as they increase the supply of terrorist attacks from the host countries, even though this effect has been significantly reduced by the Obama administration.

More Information
Contents
More Information
This book offers a unique and insightful econometric evaluation of the policies used to fight transnational terrorism between 1990 and 2014. It uses the tools of modern economics, game theory and structural econometrics to analyze the roles of foreign aid, educational capital, and military intervention.

Jean-Paul Azam and Véronique Thelen analyze panel data over 25 years across 124 countries. They prove that foreign aid plays a key role in inducing recipient governments to protect the donors’ political and economic interests within their sphere of influence. Demonstrating that countries endowed with better educational capital export fewer terrorist attacks, they also illustrate that, in contrast, military intervention is counter-productive in abating terrorism. Recognizing the strides taken by the Obama administration to increase the role of foreign aid and reduce the use of military interventions, this book shows the significant impact this has had in reducing the number of transnational terrorist attacks per source country, and suggests further developments in this vein.

Practical and timely, this book will be of particular interest to students and scholars of economics and political science, as well as those working on the wider issue of terrorism. Presenting a series of new findings, the book will also appeal to international policy makers and government officials.

Contents
Contents: 1. Introduction and Overview Part 1: Getting the Questions Right 2: Targets and Perpetrators of Transnational Terrorist Attacks 3: Why Suicide Terrorists Get Educated 4: Aid and Military Intervention in a Model of Delegated Protection Part 2: Empirical Answers 5: Testing the Impacts of Foreign Aid and Military Interventions 6: Estimating the Speed of Terrorist Responses. 7: The Problem of Imported Attacks 8. General Conclusion Bibliography Index