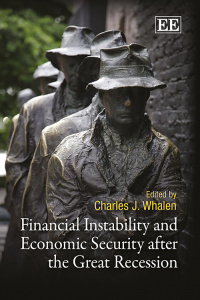 Financial Instability and Economic Security after the Great Recession

9780857934833 Edward Elgar Publishing
Edited by Charles J. Whalen, Research Fellow, The Baldy Center for Law and Social Policy, University at Buffalo, Buffalo, NY, US
Publication Date: December 2011 ISBN: 978 0 85793 483 3 Extent: 240 pp
This timely book rethinks economic theory and policy by addressing the problem of economic instability and the need to secure broadly shared prosperity. It stresses that advancing economics in the wake of the Great Recession requires an evolutionary standpoint, greater attention to uncertainty and expectations, and the integration of finance into macroeconomics. The result is a broader array of policy options – and challenges – than conventional economics presents.

More Information
Critical Acclaim
Contributors
Contents
More Information
This timely book rethinks economic theory and policy by addressing the problem of economic instability and the need to secure broadly shared prosperity. It stresses that advancing economics in the wake of the Great Recession requires an evolutionary standpoint, greater attention to uncertainty and expectations, and the integration of finance into macroeconomics. The result is a broader array of policy options – and challenges – than conventional economics presents.

Building on the pioneering work of Thorstein Veblen, John R. Commons and John Maynard Keynes, the authors synthesize key insights from Institutional and Post Keynesian economics into Post-Keynesian Institutionalism. Then they use that framework to explore an array of economic problems confronting the United States and the world. Inspired by the work of Hyman Minsky, the authors place financial relations at the center of their analysis of how economies operate and change over time.

Students and scholars of macroeconomics and public policy will find this book of interest, as will a wider audience of financial analysts, policymakers and citizens interested in understanding economic booms and downturns.
Critical Acclaim
‘This book advances the re-unification of the Institutionalist and Keynesian traditions, now unstoppable, which when last combined eighty years ago proved the power of progressive and pragmatic thought. Let the spirit of Keynes and Commons inspire our new era – and perhaps this time a coherent, enduring and useful academic economics may also result.’
– James K. Galbraith, President, Association for Evolutionary Economics (2012)

‘A failing orthodoxy calls out for powerful alternatives. Neoclassical economics is that failed orthodoxy; Whalen and his contributors are the critical alternative. In this finely orchestrated edited volume, the contributors take turns wielding a sledgehammer to demolish the weakened edifice of neoclassical theory. Then, each adds a brick to a new theoretical foundation as they work together to expand upon the Post-Keynesian Institutionalist approach, especially the ideas laid down by Hyman Minsky. Their critique is clear and the alternative theory and policies they present are critical for anyone trying to understand the nature and operation of market-based economies.’
– Dorene Isenberg, University of Redlands, US

‘This important and fascinating book confirms that policymakers would do well to brush up on their reading of Hyman Minsky as they wrestle with the ongoing effects of the global financial crisis. It makes a compelling case for understanding the current situation as a crisis of capitalism – a system that veers between stability and instability – and for managing and regulating economies on the basis of Minsky’s insight that stability breeds instability. Minsky’s insight was psychological, not merely economic, and this volume furthers the argument for including disciplines such as psychology and philosophy in understanding markets. It also helps us recognize the truth that, in the end, economies are human constructs and it will require strong doses of humanism to successfully manage our economic future.’
– Michael E. Lewitt, Harch Capital Management and author of The Death of Capital: How Creative Policy Can Restore Stability

‘Charles Whalen has been the torch-bearer for Post-Keynesian Institutionalism for many years. The fruit of his thought and time is reaped in the publication of this valuable work that should be of interest to all economists, particularly those concerned with the macroeconomic workings of the real economy. While there are multiple authors, Whalen wrote or co-authored half of the chapters, giving the book coherence not usually found in a collection of essays; a first-rate book.’
– Charles K. Wilber, University of Notre Dame, US

‘A convergence of Post Keynesian and Institutional economics, which have much in common, offers a sound and practical way forward after the Great Recession. By drawing inspiration from Hyman Minsky and tracing similarities in the economics of Veblen, Commons and Keynes, this book pursues such a convergence in an original and thought-provoking manner. The result is a new way of thinking about economics, one based on serious economic theory and rooted firmly in economic reality.’
– Philip Arestis, University of Cambridge, UK

‘In the 1930s, economic theory and policy underwent dramatic change; such a shift occurs rarely and only in times of great calamity. We are in a similar period today, and this book enlightens economic policy and contributes to change that is ongoing in the mainstream of economic thinking. Economists and policymakers alike will benefit from this book.’
– Ronnie J. Phillips, Colorado State University, US

‘Financial Instability and Economic Security after the Great Recession explores the close relationship between Institutional and Post Keynesian economics, thereby contributing greatly to our understanding of the recent – indeed, still ongoing – crisis in the U.S. economy and global financial markets. Together these two schools of thought provide coherent diagnoses and prescriptions that are wholly lacking in orthodox neoclassical theory. We are reminded that institutions matter, unregulated financial markets are not self-correcting, economies stall at equilibriums far below potential, and activist government is the only path to rebuilding a stable and balanced economy. This book will help greatly in the important task of rethinking economics and pointing us in the direction of reform and recovery.’
– Timothy A. Canova, Chapman University School of Law, US

‘The volume offers an intriguing economic frame that vastly broadens the possibilities for economic research and shifts the focus of economists from markets to people. . . This volume makes a coherent and articulate case for a new interpretation of existing economic theories with long traditions that could help inform both research and policy in the future.’
– Christian Weller, Perspectives on Work

‘For those who take the work of Hyman Minsky seriously, this collection of essays provides a most welcome and refreshing examination of modern economic reality. It also demonstrates just how fruitful a conjoining of Post Keynesian and Institutionalist theory can be. Whalen has chosen his authors wisely, and, taken as a whole, their contributions provide an illuminating inquiry into what Minsky called “money-manager capitalism”. The authors continue in the Minsky tradition, complementing his theoretical work and driving it forward. I highly recommend this book to not only economists who consider themselves Post Keynesian or Institutionalist, but to all who are looking for a way out of the theoretical impasse posed by conventional economics.’
– John Henry, University of Missouri-Kansas City, US

‘The end of the Great Moderation (a period characterized by modest business cycles) and the demise of its intellectual underpinnings, such as the efficient market hypothesis, opens the door to fresh thinking about the evolution of the US and world economies. This volume responds with a compendium of insights that grow out of Post-Keynesian Institutionalism. Central constructs in the analysis – essential to understanding the new Great Instability and to generating constructive policy responses – include money-manager capitalism, financial regulation, and economic evolution. The book provides a persuasive basis for reconstructing macroeconomics and for finding sets of policies that could lead to greater world prosperity. This is an important contribution, since much of the intellectual and policy response to the current crisis has challenged the status quo very little and has not inoculated the global economy from further instability.’
– Kenneth P. Jameson, University of Utah, US

‘This book makes a major contribution toward developing an economic framework to address the policy failures that precipitated the 2007–2009 financial crisis and slowed recovery from the Great Recession. It begins that process with wonderfully clear analyses of the influence of earlier non-classical economic thinkers on Keynes and Minsky and then uses their insights and hypotheses to critique the economic thinking that failed to anticipate the crisis. But, unlike many other excellent analyses of recent events, it also identifies policy options capable of preventing future crises and ensuring a more rapid recovery. The authors have laid a strong foundation for the theoretical perspective required to secure the broadly shared prosperity that many view as the overriding objective of an economic system.’
– Jane D’Arista, University of Massachusetts at Amherst, US

‘Financial Instability and Economic Security after the Great Recession is a welcomed volume for a variety of reasons. The book does a fine job of: 1) surveying the foundations of Post-Keynesian Institutionalism (PKI); 2) unfolding new ways of understanding and appreciating the economic and institutional insights of Hyman Minsky (which are many); and 3) providing new economic analysis into the recent financial crisis both in the United States and globally. . . How uncertainty affects institutions and individual behavior is something that needs more exploration, and this volume contributes to a much-needed discussion on how both institutionalists and Post-Keynesians can work together on this. . . a very interesting and stimulating book that provides some new insights in the development of both Institutionalist and Post-Keynesian thought.’
– Richard Holt, Heterodox Economics Newsletter

‘Institutionalists and Post Keynesians have a great deal in common, so much so that it is surprising how little cooperation there has been between them. This innovative and engaging volume will help to put this right. Several of the contributors identify the ideas of Hyman Minsky as providing a bridge between the two traditions (in much the same way as Michał Kalecki connects Post Keynesian and Marxian thought), suggesting important ways these camps can profit from each other’s insights. Across the volume, the crucial concepts of ‘futurity’, expectations and fundamental uncertainty shape the authors’ approach to economic theory, while an insistence on the need for a ‘more wisely managed capitalism’ unites their policy discussions. This book deserves to be widely read; it will have important consequences.’
– John E. King, La Trobe University, Australia

2. Towards a Synthesis of Institutional and Post Keynesian Economics
W. Robert Brazelton and Charles J. Whalen

PART III: THE GLOBAL ECONOMY
7. Regulating for Stability: Bank Capitalization and the Emergence of an International Lender of Last Resort
Jan Toporowski

8. Evolution Without Fundamental Change: The Washington Consensus on Economic Development and its Significance for Post-Keynesian Institutionalism
John Marangos and Charles J. Whalen