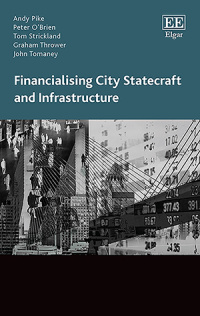 More Information
Critical Acclaim
Contents
More Information
Infrastructure systems provide the services we all rely upon for our day-to-day lives. Through new conceptual work and fresh empirical analysis, this book investigates how financialisation engages with city governance and infrastructure provision, identifying its wider and longer-term implications for urban and regional development, politics and policy.

Proposing a more people-oriented approach to answering the question of 'What kind of urban infrastructure, and for whom?’, this book addresses the struggles of national and local governments to fund, finance and govern urban infrastructure. It develops new insights to explain the socially and spatially uneven mixing of managerial, entrepreneurial and financialised city governance in austerity and limited decentralisation across England. As urban infrastructure fixes for the London global city-region risk undermining national ‘rebalancing’ efforts in the UK, city statecraft in the rest of the country is having uneasily to combine speculation, risk-taking and prospective venturing with co-ordination, planning and regulation.

This book will be of interest to researchers and scholars in the fields of business and management, economics, geography, planning, and political science. Its conclusions will be valuable to policymakers and practitioners in both the public and private sectors seeking insights into the intersections of financialisation, decentralisation and austerity in the UK, Europe and globally.
Critical Acclaim
‘All in all, this is an insightful volume that makes substantial progress in scientific research into one of the most critical urban problems of present-day societies, and will be of interest to those engaged in the discussion and analysis of contemporary forms of urban funding and financing’
– Regional Studies

‘Financialising City Statecraft and Infrastructure explores the crucial connection between globalised financial flows and the infrastructure that provides the scaffolding for urban development. By following the money, the authors show the interaction of state and capital in shaping urban form and the uneven impacts on particular cities and groups within them.’
– Susan S. Fainstein, Harvard University, US

Handbook on City and Regional Leadership