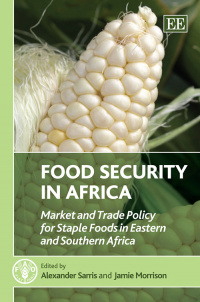 More Information
Critical Acclaim
Contributors
Contents
More Information
Drawing on insights from theoretical applications, empirically based approaches and case study experience, this book contributes to the improved design and use of trade and related policy interventions in staple food markets.

Trade policy interventions have a potentially critical role to play in the development of staple food markets in developing countries and, as a source of revenue, in wider processes of rural development. Governments have long defended trade and related policy interventions in staple food markets on the basis of food security concerns. However, the design and implementation of these policies has often resulted in unintended impacts, increasing the risks faced by private sector actors and reducing their incentives for investment in improved market performance. In the context of increasingly volatile staple food markets, this book, commissioned from leading experts in this field, seeks to enhance dialogue between stakeholders involved in, and affected by, the design and use of trade and related policy interventions.

This significant book will appeal to policy analysts and decision makers influential in the design and implementation of trade and related market interventions, as well as students of development economics. Researchers contributing to debates on the use and impacts of trade and related market interventions in staple food markets in poor countries will also find this volume of great benefit.
Critical Acclaim
‘The volume is a valuable compilation of evidence-based analysis of staple food markets in eastern and southern Africa. . . It will serve as a useful reference for applied researchers, policy-makers and development practitioners interested in food policy in developing countries.’
– Nicholas Minot, European Review of Agricultural Economics

‘As they often do, Jamie Morrison and Alexander Sarris have provided researchers, policy-makers, and the interested public with the firm empirical grounding needed for sound agricultural development policies. They have synthesized from a rich and varied set of country studies a unique contribution to one of the key challenges of our times – increasing the productivity of smallholder food production in the age of globalization.’
– Timothy A. Wise, Tufts University, US

‘Food security has been a major concern in Africa for decades, and a more pressing problem with recent increases in food prices. The editors and contributors to this volume are experts in the field and should be commended for a timely, informative and in places challenging analysis of food production and markets in eastern and southern Africa. The volume brings a refreshing variety of theoretical, analytical and informed case study approaches to bear on the food security problem; it should be read by anybody seriously interested in African development.’
– Oliver Morrissey, University of Nottingham, UK

14. Trade and Market Policy Interventions: A Synthesis of Insights from Research on Eastern and Southern African Grain Markets
Jamie Morrison and Alexander Sarris

A Modern Guide to Food Economics