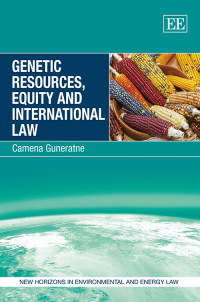 9780857934949 Edward Elgar Publishing
New Horizons in Environmental and Energy Law series
Camena Guneratne, Professor, Open University of Sri Lanka
Publication Date: February 2013 ISBN: 978 0 85793 494 9 Extent: 336 pp
This book examines current developments in international law which regulate the uses of plant genetic resources for food and agriculture, and the various property regimes which are applied to these resources by these international agreements.

In the current context of the global food crisis, the development and stability of national agricultural systems is an urgent concern, particularly among developing countries. This stability, and national food security, will potentially be threatened if these countries are unable to have free access to agricultural crop plants. This book analyses a range of international agreements including the recently adopted Nagoya Protocol and demonstrates that in their current implementation they favour private ownership of these resources rather than free access. The book takes the position that this is inherently inequitable and these resources should be maintained in the public domain.

This book will be of use to a wide range of readers from students and scholars to those working in the fields of trade and intellectual property, human rights, environmental conservation and advocacy on international issues. It contains a rigorous legal analysis of current international law development on the issue based on the negotiations which have taken place in the relevant forums, and will therefore be particularly useful to lawyers and legal scholars. It is also written in an uncomplicated style which makes it readily accessible to non-lawyers and the case studies and empirical data used throughout the book adds to its interest.
Critical Acclaim
‘This book provides a clear analysis of the multi-level impacts of the existing international law regime related to genetic resources on developing countries. It does so through a cogent exposition of the different areas of the law pertaining to genetic resources that are relevant and impact on people's rights and livelihoods. Its focus on equity is a welcome addition to the literature.’
– Philippe Cullet, University of London, UK

‘Camena Guneratne’s thought-provoking book critically evaluates the clash between the private property approach to genetic resources embedded in international intellectual property conventions, and the competing values embedded in a variety of other conventions and laws. She contests key assumptions behind intellectual property regimes supporting genetic commerce, distinguishing the genetic “commons” from other types of resource. This book provides a comprehensive scholarly dealing of the topics noted in its title, but also should increase debate about policy failures in responding to the risks to the underprivileged of the instruments we use to pursue the economic interests of the majority.’
– Paul Martin, University of New England, Australia

‘This is a wonderful book. All too often in the quest to preserve biodiversity, we forget that the equation of equity has to be at the forefront of the debates on sustainable development. Professor Guneratne rectifies this mistake. In doing so, she shows us that in many of the most important instances, we are not only losing large parts of the natural basis on which humanity depends, but also the ability to control the political and legal processes of which many of the world’s poorest people depend. This linkage between biodiversity, politics and international law is of such a high calibre, that it is likely that this work will become a key text for students and scholars alike.’
– Alexander Gillespie, University of Waikato, New Zealand
Contents
Contents: 1. Introduction 2. Overview of Plant Genetic Resources for Food and Agriculture 3. The Uses of Biological Resources 4. Property Regimes Over Biological Resources 5. The International Environmental Regime on Plant Genetic Resources and Traditional Knowledge 6. Farmers, Indigenous and Local Communities and Traditional Knowledge 7. The International Property Rights Regime 8. The Plant Protection Provisions of UPOV, the TRIPS Agreement and Bilateral Treaties 9. Access and Benefit Sharing Measures 10. Sui Generis Legislation 11. Disclosure of Origin of Genetic Resources and Traditional Knowledge 12. The Recognition of Traditional Knowledge as Prior Art 13. Conclusion Index
Add to Wish List