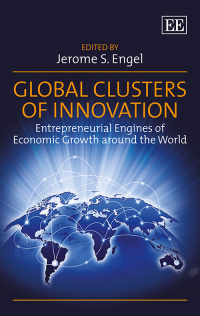 Entrepreneurial Engines of Economic Growth around the World

9781783470822 Edward Elgar Publishing
Edited by Jerome S. Engel, University of California, Berkeley, US
Publication Date: 2014 ISBN: 978 1 78347 082 2 Extent: 432 pp
In the geography of the global economy, there are known ‘hot spots’ where new technologies germinate at an astounding rate and pools of capital, expertise and talent foster the development of new industries and new ways of doing business. These clusters of innovation are significant drivers of value creation and function as models for economic expansion in both developed and developing countries. This book explores the key attributes of these innovation hubs using case studies from around the world.

More Information
Critical Acclaim
Contributors
Contents
More Information
Entrepreneurship and innovation are the drivers of value creation in the twenty-first century. In the geography of the global economy there are ‘hot spots’ where new technologies germinate at an astounding rate and pools of capital, expertise, and talent foster the development of new industries, and new ways of doing business. These clusters of innovation have key attributes distinct from traditional industrial clusters that allow them to extend beyond geographic boundaries and serve as models for economic expansion in both developed and developing countries. How do these clusters emerge? What is the role of individual institutions such as governments, universities, major corporations, investors, and the individual entrepreneur? Are there systemic underpinnings, an invisible hand, that encourage these communities?

The book begins with a presentation of the Clusters of Innovation Framework that identifies the salient components, behaviors, and linkages that characterize an innovation cluster, followed by an analysis of the archetypal cluster, Silicon Valley. Subsequent chapters probe how these characteristics apply in a diverse selection of economic communities in Germany, Belgium, Spain, the United Kingdom, Israel, Japan, Taiwan, China, Colombia, Mexico, and Brazil. Concluding chapters investigate the role of transregional organizations as cross-border disseminators of best practices in entrepreneurship and innovation.

Introduction
1. What are Clusters of Innovation, How do they Operate and Why are they Important?
Jerone S. Engel

4. Belgium: Building a Digital Cluster of Innovation in the Heart of Europe
Wim De Waele and Sven H. De Cleyn

PART IV ASIA
8. Japan: The University as a Driver for Innovation in Japan in Response to Two Decades of Economic Depression
Shigeo Kagami

10. China: Emergence of an Entrepreneurial Economy in an Uncertain Environment
Virginia Trigo and Qin Lang

12. Brazil: Good Governance in the Tropics–The Rise of the Porto Digital Cluster of Innovation
Flavio Feferman

14. NCIIA: Students as the Vanguard in a Geographically Dispersed Approach to Stimulating Science and Technology Innovation
Phil Weilerstein