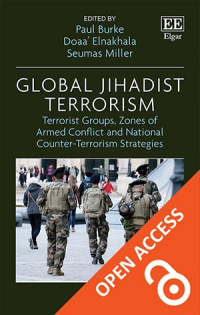 This insightful book provides a unified repository of information on jihadist terrorism. Offering an integrated treatment of terrorist groups, zones of armed conflict and counter-terrorism responses from liberal democratic states, it presents fresh empirical perspectives on the origins and progression of conflict, and contemporary global measures to combat terrorist activity.

Bringing together a multi-disciplinary team of scholars and professionals, the book examines the growth and activities of four key terrorist organisations: al-Qaeda, Islamic State, Hamas and Lashkar-e-Taiba. It discusses their theologies, motivations and the threat that they pose to liberal democracies through terrorist attacks. Chapters contain perspectives and case studies on zones of armed conflict in which terrorist organisations are being fought directly in Afghanistan, Iraq, Syria and Israel–Palestine, evaluating the historic roots of these conflicts and their evolution over time. It also examines national efforts in the US, the UK, France, India and Israel in combating terrorism, considering the preventative measures and activities of intelligence and security agencies through personal interviews conducted with service and retired professionals.

Based on crucial empirical investigations conducted by intelligence professionals, scholars, research specialists and journalists, this is critical reading for researchers and advanced students in terrorism studies, international studies and conflict resolution, as well as those studying political science more broadly. It will also benefit policy-makers and intelligence and law enforcement specialists in need of a comparative study of contemporary counter-terrorism responses.