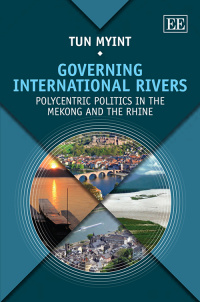 Polycentric Politics in the Mekong and the Rhine

9781781001479 Edward Elgar Publishing
Tun Myint, Department of Political Science, Carleton College, Northfield, MN, US
Publication Date: June 2012 ISBN: 978 1 78100 147 9 Extent: 288 pp
This important book employs the theory of polycentricity, a system with several centers as an analytical concept to explain the multilayered international environmental governance of river basins. It introduces a new methodological framework to deconstruct and investigate the dynamics of citizens, states and non-state actors in world politics via the context of river basin governance.

More Information
Critical Acclaim
Contents
More Information
This important book employs the theory of polycentricity, a system with several centers as an analytical concept to explain the multilayered international environmental governance of river basins. It introduces a new methodological framework to deconstruct and investigate the dynamics of citizens, states and non-state actors in world politics via the context of river basin governance.

The methodology is tested through in-depth field-based case studies, illustrating how local citizens and industries in the Mekong and Rhine river basins participate in transnational environmental governance at both local and international levels. Tun Myint expertly presents both a methodology and theory to conceive polycentricity of world politics as a major intellectual milestone in theorizing world politics. Providing nuanced details of cases showing the challenges and feasibilities of incorporating multiple actors into a governance framework, the book provides careful analysis into the power of non-state actors.
Critical Acclaim
‘In this engaging book, Myint seeks to answer the question of how and why non-state actors and local communities are shaping transnational environmental regimes. . . Governing International Rivers is a book of value to both practitioners and scholars interested in the politics of water management. Myint’s focus on the Rhine and Mekong makes the book especially relevant, since there are few basins in the world that have been more contentious for longer periods of time that these. For those who study these two basins in particular, Myint’s book will continue to a better understanding of the effect that political disputes have on policy-making processes and thus will retain its scholarly value for years to come.’
– Ramiro Berardo, International Relations

‘This most detailed and comprehensive study is most important.’
– Sally Ramage, The Criminal Lawyer

‘This superb analysis of water governance in the Rhine and Mekong river basins should be read by everyone interested in the challenges of international water management.’
– Thomas Bernauer, Swiss Federal Institute of Technology (ETH), Zurich, Switzerland

‘This is a must read for scholars and water governance practitioners as it addresses the underexploited role of non-state actors and local citizens in the field of international water governance. The book fills in this knowledge gap by offering an inspiring refinement of the theory of polycentricity. Evidence is found by well-written and attractive in-depth case studies dealing with the international clean up of the Rhine and the construction of the Pak Mun Dam in the Mekong basin.’
– Carel Dieperink, Utrecht University, The Netherlands

‘Employing a sophisticated understanding of the interplay between states and nonstate actors, Tun Myint develops a convincing account of the evolution of governance systems for the Rhine and Mekong river basins. In the process, he not only adds to our knowledge of water management at the international level but also deepens our appreciation of the various roles that nonstate actors play in international environmental governance.’
– Oran Young, University of California, Santa Barbara, US

‘Comparative studies of great river systems and the politics of their regulation are rare. Far rarer still, are comparisons of this historical depth, analytical sophistication, attention to local detail and to the contingencies that make breakthroughs possible. Tun Myint’s study of the Rhine and Mekong will inspire and inform future studies of both river and environmental politics.’
– James C. Scott, Yale University, US
Contents
Contents: 1. Governance and International Rivers 2. Polycentricity of World Politics 3. Institutional Evolution in the Mekong and the Rhine 4. Multilayer Environmental Governance in the Rhine 5. Influence of Non-state Actors in Governance of the Rhine 6. Issues, Interests and Actors in the Pak Mun Dam Project 7. Influence of Non-state Actors on Pak Mun Dam 8. Polycentric Environmental Governance References Index
Add to Wish List