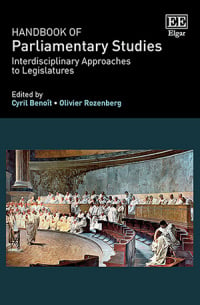 9781789906509 Edward Elgar Publishing
Edited by Cyril Benoît, CNRS Researcher and Olivier Rozenberg, Associate Professor, Centre for European Studies and Comparative Politics, Sciences Po, France
Publication Date: 2020 ISBN: 978 1 78990 650 9 Extent: 512 pp
This comprehensive Handbook takes a multidisciplinary approach to the study of parliaments, offering novel insights into the key aspects of legislatures, legislative institutions and legislative politics. Connecting rich and diverse fields of inquiry, it illuminates how the study of parliaments has shaped a wider understanding surrounding politics and society over the past decades.

More Information
Critical Acclaim
Contributors
Contents
More Information
This comprehensive Handbook takes a multidisciplinary approach to the study of parliaments, offering novel insights into the key aspects of legislatures, legislative institutions and legislative politics. Connecting rich and diverse fields of inquiry, it illuminates how the study of parliaments has shaped a wider understanding surrounding politics and society over the past decades.

Through 26 thematic chapters, expert contributors analyse parliamentary institutions from various disciplinary perspectives (history, law, political science, political economy, sociology and anthropology). A wide range of approaches is covered, including the sociological study of members of parliaments, gender studies and the mathematical conceptualisation of legislatures. Exploring the history of parliament, the concepts and theories of parliamentarism, constitutional law, and the linkages between parliaments and the administrative state or with populism, this incisive Handbook provides a panoramic view of this institution. Chapters also map the main trends, patterns of developments and controversies related to parliaments, assessing the strengths and weaknesses of current research and identifying a range of promising avenues for further study.

Drawing together international and comparative approaches, the Handbook of Parliamentary Studies will be a critical resource for academics and students of parliamentary politics, political science, political economy, public law and political history. It also provides a vital foundation for researchers of legislative and political institutions.

Critical Acclaim
‘This intriguing volume brings together a remarkably rich and diverse set of perspectives on parliamentary politics from a variety of scholarly disciplines and traditions. There is much to appreciate and celebrate, and from here on there is no excuse for parliamentary studies to be dull or parochial.’
– Kaare Strøm, University of California, San Diego, US

‘For decades parliaments were understudied. This changed drastically when the wave of democratization after the fall of the Iron Curtain crystallized in the establishment of freely elected parliaments. The Handbook of Parliamentary Studies proves that this was not merely driven by idiosyncrasies of ever more specialized sciences but by the very nature of the institution itself. The normative substance and empirical richness of Parliament rightfully resulted in more and more research efforts from a wide range of disciplines. With their selection of fields and authors Benoît and Rozenberg impressively demonstrate the plethora of knowledge and insights assembled on parliaments. By widening the perspectives beyond the boundaries of political science and constitutional law they fill “Parliamentary Studies” with a new, attractive meaning.’
– Suzanne S. Schüttemeyer, Martin-Luther-University, Halle, Germany

‘Parliaments have been the objects of sustained study in many academic disciplines. While the respective disciplinary groups occasionally intersect, the new Handbook of Parliamentary Studies is the first to my knowledge that takes an avowedly interdisciplinary perspective, bringing together scholars from five main fields to consider both their distinctive and common interests in the study of legislatures. Given the growth of legislative studies generally, the Handbook will be a welcome addition for scholars seeking a broader perspective.’
– Gary Cox, Stanford University, US

Chapter 17. Parliaments in an age of populism
Toru Yoshida

Chapter 25: Parliament in the policymaking process : toward a sociology of law-making
Marc Milet