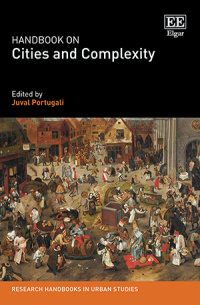 9781789900118 Edward Elgar Publishing
Research Handbooks in Urban Studies series
Edited by Juval Portugali, Professor of Human Geography, Department of Geography and the Human Environment, Tel Aviv University, Israel
Publication Date: 2021 ISBN: 978 1 78990 011 8 Extent: 456 pp
Written by some of the founders of complexity theory and complexity theories of cities (CTC), this Handbook expertly guides the reader through over forty years of intertwined developments: the emergence of general theories of complex self-organized systems and the consequent emergence of CTC.

Examining studies from the end of 1970 through to the current leading approach to urbanism, planning and design, the book provides an up-to-date snapshot of CTC. Insightful chapters are split into five parts covering the early foundations of the topic, the evolution of towns and cities and urban complexity, the links between complexity, languages and cities, modelling traffic and parking in cities, and urban planning and design. The Handbook on Cities and Complexity concludes with the contributors’ personal statements on their observations of COVID-19’s impact upon global cities.

This book will be an invaluable resource for those researching cities and complexity and also for scholars of urban studies, planning, physics, mathematics, AI, and architecture.

Critical Acclaim
‘This is a fascinating collection of discussions by leading authors, ranging from philosophical perspectives to conceptual frameworks and mathematical models across many disciplines. A unifying theme is the role of human cognition and decision making, addressed via psychology, uncertainty and risk, evolutionary game theory, behavioral economics and more. The book should be a reference to anyone interested in the history of the field and as a source of ideas for the opportunities (and challenges) of treating cities as complex systems in contrast to less holistic approaches to urban planning and policy.’
– Luis Bettencourt, University of Chicago, US

Introduction to the Handbook on Cities and Complexity 1
Juval Portugali

PART III COMPLEXITY, LANGUAGE AND CITIES
11 New concepts in complexity theory arising from studies in the field of
architecture: an overview of the four books of the nature of order with
emphasis on the scientific problems which are raised 210
Christopher Alexander
12 The dialectic as driver of complexity in urban and social systems 233
Alan Penn