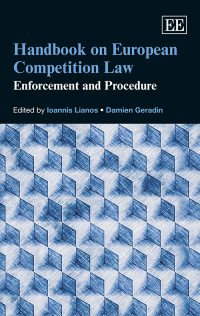 The companion volume, Handbook on European Competition Law: Substantive Aspects, sets the context for examination of substantive law by reviewing and analyzing the goals of competition law. It then covers the substantive building blocks of EU competition law, including horizontal and vertical agreements, cartels, mergers, and also provides valuable coverage of the interaction between competition and regulation, hub and spoke collusion, and information exchange agreements. The importance of the abuse of dominance doctrine is reflected in three discrete chapters considering exploitative abuses, exclusionary pricing abuses, and exclusionary non-pricing abuses.

2. The Public Enforcement of Articles 101 and 102 TFEU under Council Regulation No 1/2003: Due Process Considerations
Arianna Andreangeli

4. Private Enforcement in the EU with Emphasis on Damages Actions
Assimakis P. Komninos