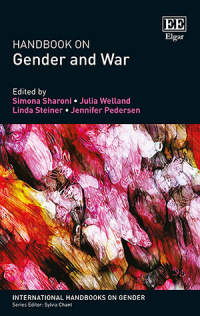 Handbook on Gender and War

9781849808910 Edward Elgar Publishing
International Handbooks on Gender series
Edited by Simona Sharoni, Professor of Gender and Women's Studies, State University of New York, Plattsburgh, US, Julia Welland, Lecturer, Department of Politics and International Studies, University of Warwick, UK, Linda Steiner, Professor, University of Maryland, College Park, US and Jennifer Pedersen, Independent Scholar, Ottawa, Canada
Publication Date: 2016 ISBN: 978 1 84980 891 0 Extent: 616 pp
Gender and war are in many ways inextricably linked, and this path-breaking Handbook systematically examines the major issues surrounding this relationship. Each of its four sections covers a distinct phase of war: gender and opposition to war; gender and the conduct of war; gender and the impact of war; and gender and the aftermath of war. Original contributions from an international group of leading experts make use of a range of historical and contemporary examples to interrogate the multi-faceted connection between gender and war.

More Information
Critical Acclaim
Contributors
Contents
More Information
This interdisciplinary Handbook offers a comprehensive and detailed overview of the relationship between gender and war, exploring the conduct of war, its impact, aftermath and opposition to it. Offering sophisticated theoretical insights and empirical research from the First World War to contemporary conflicts around the world, this Handbook underscores the centrality of gender to critical examinations of war.

A standout characteristic of this volume is its synthesis of both scholarly and policy-relevant debates as well as detailed case studies addressing both war and post-conflict realities. Including feminist perspectives with critical attention to men and masculinities, this Handbook proves itself to be both expansive and meticulous in its scholarly approach and critiques.

The Handbook on Gender and War draws upon research from a wide variety of disciplines and will be of interest to scholars and researchers of gender and sexuality studies, international relations, sociology, peace and conflict studies and cultural studies. It will also hold great appeal to policymakers and field workers engaged in projects in post-conflict reconstruction, human rights, development and gender justice.

Critical Acclaim
'The main strength of this Handbook is that it succeeds in reflecting the complexity of the topic. While the title promises a handbook on “gender and war”, the actual content goes much further than that, by addressing not only issues related to gender and war, but also to terrorism, occupation, espionage, anti-war movements and post-war realities. War and conflict studies are inherently interdisciplinary, but such a diverse range of authors’ disciplinary backgrounds is rare even in this field of study. the Handbook on Gender and War is an extremely useful resources which would be highly recommended for students, researchers, policy-makers and activists alike.'
– Jennifer Philippa Eggert, University of Warwick, LSE Gender Institute Blog

‘Handbook on Gender and War serves as an important collection and point of reference for scholars and students alike.’
– Georgina Holmes, International Feminist Journal of Politics

‘This timely Handbook contains the most comprehensive, interdisciplinary and cutting-edge collection of writings, empirical findings and conceptual ideas about the gendered aspects of war, violence, militarism, security and peace. In the context of exploring the continuum of war in its numerous manifestations, the contributions also further our understanding of the role of masculinities and the relationship between political and sexualized violence. Building on recent feminist theorizing, this impressive collection constitutes an excellent resource not only for researchers and educators, but also policy-makers and activists.’
– Nadje Al-Ali, SOAS University of London, UK

‘Simona Sharoni, Julia Welland, Linda Steiner and Jennifer Pedersen have compiled an extraordinarily rich collection of contemporary texts on gender, conflict, peace and security. The interdisciplinary breadth, together with the combination of theoretical debate and on-the-ground research, make this an eminently readable, engaging and thought-provoking anthology, of great value to academics, activists, policy-makers and practitioners.’
– Henri Myrttinen, International Alert, UK

‘For anyone plunging into the deep and wide waters of thinking and research on the workings of masculinities and femininities in war, this is definitely the place to start. Each contributor is a specialist with detailed knowledge of the complex processes that set the stage for, and perpetuate militarized violence. This volume is also a window on what it takes in gendered political action to create sustainable peace.’
– Cynthia Enloe, Clark University, US

‘The Handbook on Gender and War is without a doubt a greatly welcomed anthology in the field. While the literature is growing at an increasing pace, the advent of a handbook cements the stature of gender and war as a respectable and independent research area in the academy. Ideal for students and researchers, the book covers a variety of subjects, all written about by leading researchers with great nuance. This includes well-known themes, such as gender and terrorism, gender-based violence in war, feminist antimilitarism, and gender and transitional justice, all building onto the existing scholarship while presenting the topics in a new light. Newer additions are also present, like gendered politics in private military security companies, gender in war reporting, and girl soldiers in demobilisation and reintegration processes. The handbook, therefore, demonstrates that research in gender and war is quickly evolving, and is keeping pace with the new trends in academia.
– E-International Relations Blog

PART I GENDER AND THE CONDUCT OF WAR
Introduction
Julia Welland

1. Gender and Militaries: The Importance of Military Masculinities for the Conduct of State Sanctioned Violence
Victoria M. Basham

2. On the Imagination of ‘Woman’ as Killer in War
Linda Åhäll

5. Not All Soldiers: Hegemonic Masculinity and the Problem of Soldiers’ Agency in an Age of Technological Intervention
Mary Manjikian

11. Gender and the Economic Impacts of War
Joyce P. Jacobsen

12. The War Comes Home: The Toll of War and the Shifting Burden of Care
Alison Howell and Zoë H. Wool

13. The Sexual Economy of War: Implications for the Integration of Women into the US Armed Forces
Joane Nagel and Lindsey Feitz

18. Gender and Resistance to Political Violence in Palestine and Israel
Simona Sharoni

19. In the Rain and In the Sun: Women's Peace Activism in Liberia
Jennifer Pedersen

20. Gender and the Campaign for Nuclear Disarmament in the 1960s
Jodi Burkett

26. Girl Soldiers and the Complexities of Demobilization and Reintegration
Myriam Denov, Alexandra Ricard-Guay and Amber Green