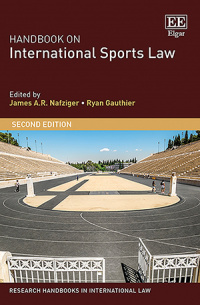 Approaching international sports law through three converging frameworks, this Handbook examines the institutions of international sport, the eligibility rights and protections of athletes, as well as the commercial side of international sport. New topics discussed in this edition include concussions, EU antitrust and other regulation of sport, review of awards by the Court of Arbitration for Sport (CAS), college and university athletics, league and team restrictions on athlete movement, taxation of athletes and sports as cultural heritage.

Covering some of the most controversial and cutting-edge issues in international sports law, this timely Handbook will prove invaluable for academics and students of sports law, sports management, international law and comparative law. With a global scope, the Handbook will also prove a vital resource to practicing lawyers, players’ agents, senior executives and other professionals within the sports industry.
Critical Acclaim
‘The Handbook on International Sports Law provides an excellent overview and critical analysis of the most significant sports law matters facing the global community of sports and the industry it serves. James A.R. Nafziger and Ryan Gauthier lead an impressive team of sports law scholars and experts in a discussion of crucial issues, including player health controversies and restrictions on competition that interface with antitrust and labor laws. The Handbook will provide a valuable resource to students who are studying international and comparative sports law as well as practitioners and academics.’
– Michael McCann, University of New Hampshire, US

‘Despite taking a wide variety of forms, sport is universal. Circumstances and events generating legal issues in sport are similarly universal, but sport operates under many legal systems worldwide. Fragmentation and inconsistency in legal outcomes often result. This innovative collection of essays by leading scholars of sports law addresses a gap in the literature. It advances understanding of how different legal systems respond to common issues and offers insights into the developing international system of sports law. Researchers will find this book of inescapable assistance and interest.’
– Hayden Opie, Melbourne Law School, Australia

‘Nafziger and Ross have provided an enormously useful collection of incisive and integrating essays that cover the gamut of important issues in the emerging field of international sport law.’
– Andrew Zimbalist, Smith College, US