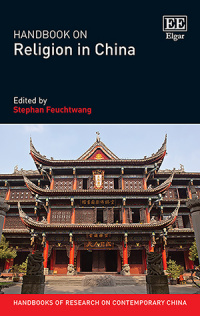 Handbook on Religion in China

9781786437952 Edward Elgar Publishing
Handbooks of Research on Contemporary China series
Edited by Stephan Feuchtwang, London School of Economics, UK
Publication Date: 2020 ISBN: 978 1 78643 795 2 Extent: 488 pp
Informative and eye-opening, the Handbook on Religion in China provides a uniquely broad insight into the contemporary Chinese variations of Buddhism, Islam and Christianity. In turn, China's own religions and transmissions of rites and systems of divination have spread beyond China, a progression that is explored in detail across 19 chapters, written by leading experts in the field.

More Information
Critical Acclaim
Contributors
Contents
More Information
Informative and eye-opening, the Handbook on Religion in China provides a uniquely broad insight into the contemporary Chinese variations of Buddhism, Islam and Christianity. In turn, China's own religions of Daoism, of filial piety and transmissions of rites have spread beyond China, a progression that is explored in detail across 19 chapters, written by leading experts in the field.

Utilising a historical focus to emphasize developments and highlight the transformations of ritual practices, festivals, divination and traditions, this Handbook deals with the emergence of new attitudes to selfhood and the great diversity of civic and other rituals. Traditional ways of forming relationships and conducting life-cycle rituals are also considered. This comprehensive Handbook investigates the ways in which all of these changes are affected by governmental controls that have intriguing unintended consequences.

Providing a solid introduction for both newcomers and informed readers, this Handbook will be a key resource for sociologists and anthropologists of ritual and religion as well as students of religious studies, contemporary Chinese studies and the sociology of religion. With extensive references to assist readers wishing to further deepen their understanding this Handbook will also be of interest to historians and individuals interested in contemporary China.

Critical Acclaim
‘It is notable that at one time scholars of China thought religion would wither and possibly die out - but this was mistaken. Religion simply went underground during the earlier phase of the People’s Republic of China, only to re-emerge in significant forms afterwards. This particular volume explains that fully. The book collates a number of very valuable contributions and is highly recommended.’
– Anthony Smith, New Zealand International Review

‘In the flourishing market of surveys of Chinese religions, this Handbook stands out on many counts, including breadth of coverage, quality of writing, and variety of authors’ cultural and intellectual backgrounds. It is built not only on received categories for discussing religion, but even more on lived practice, thus shedding light on many black spots in textbooks. It illuminates the fast-changing religious situation while being historically informed. Both an essential reference book and a trove of brilliant new research.’
– Vincent Goossaert, EPHE, PSL, France

Introduction to the Handbook on Religion in China 1
Stephan Feuchtwang

PART I STATE POLICIES, CIVIC SOCIETY AND CULTURAL
REVIVAL
1 Religious policy in China 17
Richard Madsen
2 Philanthropy and the religious life of goodness in China 34
Robert P. Weller, C. Julia Huang and Keping Wu
3 Remaking the self: spirituality, civilization and the Chinese
quest for the good life in the reform era 54
Anna Iskra, Fabian Winiger and David A. Palmer
4 The contemporary Confucian revival in perspective 75
Sébastien Billioud
5 Heritage and religion in China 96
Yujie Zhu

Advanced Introduction to the Experience Economy

A Research Agenda for Animal Geographies